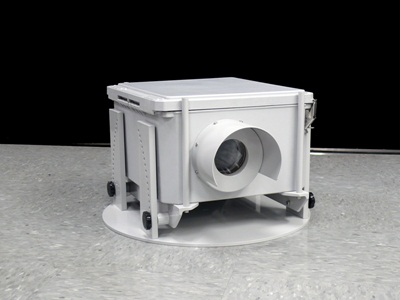 The US companies Schott North America and Space Photonics have signed an exclusive licensing agreement to commercialize and manufacture the latter’s free-space optical communications systems.

The covert “LaserFire” systems will be aimed at military and intelligence applications, where they are said to enable uninterrupted, secure links between buildings, vehicles and communications towers in locations where fiber-optic cables are unavailable or have been damaged.

According to the two companies, LaserFire incorporates a patented technology that enables automated beam pointing, acquisition and tracking (PAT). “This ensures a more robust network when optimal performance is critical, regardless of available bandwidth, distance, adverse weather conditions, or movement,” it is claimed.

They add that since the terminal uses low-power infrared lasers, it is nearly impossible for adversaries to detect and intercept the beam while the system is operating, providing the “ultimate intelligent gateway and enabler for covert operations”.

Arkansas-based Space Photonics has been working to develop the technology since starting operations back in 1999, in the process winning a series of small business innovation research (SBIR) awards totaling more than $12 million from the US military.

For example, in 2005 the company was awarded a $750,000 Phase II project by the US Air Force to develop an optical communication turret specifically designed for unmanned aerial vehicle (UAV) communications. The proposed turret did not require conventional gimballing to direct the beam, instead using a series of telescopes and a MEMS-based beam-steering technique.

The company says that it recently completed its development of the LaserFire system under a four-year Air Force Research Lab (AFRL) Phase III contract.

Although the overall system is not based on a "system-on-a-chip" MEMS design, some of the transceiver components in the LaserFire are said to be MEMS-like.

Mission-critical
“This mission-critical communications technology was developed from our long-standing collaboration with the US Department of Defense,” said Chuck Chalfant, the CEO of Space Photonics. “LaserFire will dramatically improve communications in RF-constrained environments. We chose Schott as our manufacturing partner because of the company’s unparalleled ability to industrialize and produce highly complex optics.”

Schott's expertise in optical component manufacturing is said to be critical for producing the highly collimated beams that are essential for the automated tracking element of the systems, which are based around 1.55 µm lasers.

Schott North America is no stranger to the US defense community, and already delivers optical components for use in night vision goggles, as well as laser, advanced imaging, fiber-optic and transparent armor window systems.

Just over a year ago, the company also began manufacturing chalcogenide-based optics at its production facility in Duryea, Pennsylvania, having initially made such products only at its main site in Jena, Germany – a move designed to enable it to target the US defense sector more effectively.

LaserFire will not be produced in Duryea, however. Schott’s lighting and imaging business unit, based in Southbridge, Massachusetts, is instead slated to begin manufacturing the system before the end of the calendar year.

That is because Schott will be able to combine manufacturing expertise currently used in lighting and other optical assembly applications to produce the LaserFire systems.

Thus far, a dozen LaserFire units have been delivered to customers including the AFRL, Naval Research Laboratory, NASA and Harris Communications. Schott told optics.org that it expects ten installations of the technology next year, with demand steadily increasing to around 100 units in 2015.

“In the field, effective communication determines the fate of a mission,” commented Schott Defense CEO and retired US Air Force Major General Scott Custer in the company’s statement announcing the deal. “LaserFire will ensure the safety of troops by offering a precise, secure, and dependable means of transmitting information.”