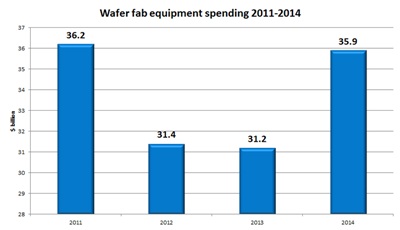 Analysts at Gartner have revised downwards their expectations of spending on semiconductor wafer fab equipment (WFE), one of the key industrial markets for photonics technologies.

“While the market will improve in 2013, it will not return to positive growth, with WFE spending projected to total $31.2 billion, a 0.8 percent decline from 2012,” the report warns. In 2014 the market should return to growth, reaching $35.9 billion but still below the level recorded in 2011.

Bob Johnson, research VP at Gartner, added: “The outlook for semiconductor equipment markets has deteriorated as the macro economy has weakened. WFE started off the year strong, as foundries and other logic manufacturers ramped up sub-30 nm [node] production. However, demand for new equipment logic production will soften as yields improve, leading to declining shipment volumes for the rest of the year.”

Its preliminary figures for August showed another decline in bookings, which slumped to just over $1.1 billion. After moving below parity in June, the book-to-bill ratio, which compares three-month average bookings with billings to indicate the health of the semiconductor equipment market, has now slipped to 0.84 – its lowest level since November 2011.

“The second half of the year continues to show reduced order and billing levels for the 2012 spending cycle,” said Dan Tracy, senior director of SEMI’s industry research and statistics division. “We expect 2012 equipment revenues to decline slightly, with total spending for front-end and back-end semiconductor equipment globally remaining at the $40 billion or greater level for the third consecutive year.” 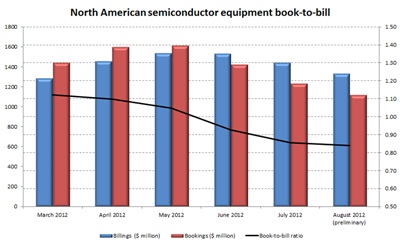 Utilization to increase through 2013
Gartner predicts that wafer fab manufacturing capacity utilization – which indicates the need for manufacturers to invest in new production equipment - will decline into the low 80 percent range by the end of 2012 before slowly increasing to about 87 percent by the end of 2013.

Utilization of leading-edge equipment is however expected to move into the low 90 percent range through 2013, providing for what Gartner’s analysts call “a somewhat positive capital investment environment”.

“Although a period of inventory correction, which led to lowered production levels, appears to be over, overall market weakness is continuing to depress utilization levels,” said Johnson.

“Increased demand, combined with less than mature yields at the leading edge, is creating shortages at the leading edge for logic, but that is not enough to bring total utilization levels up to desired levels. In the memory segment, some suppliers are even cutting production in an attempt to shore up weak market fundamentals.”

The memory portion of the market is expected to remain weak for the rest of this year, with strong declines in DRAM investments and a virtually flat NAND market. Beyond that, Gartner anticipates only modest growth, with similarly modest cyclical fluctuations as the industry returns to mid-single-digit growth in device revenue, and capital investment responds accordingly.

For foundries, capital spending has been revised downward for both 2012 and 2013 due to an earlier-than-expected yield improvement on 28 nm technology achieved by some foundries, which means that wafer demand in the fourth quarter of 2012 and first quarter of 2013 could be lower than previously thought.

However, in the longer term foundry capital expenditure looks like a bright spot in the market, and Gartner has revised its expectations upwards for future years thanks to what it calls “the more aggressive development schedule” of extreme ultraviolet (EUV) and 450 mm wafer technologies.

Recently Intel, Samsung and TSMC – the latter being the world’s largest silicon foundry – all agreed to invest heavily in the development of both EUV and 450 mm production technologies in a deal with key lithography equipment supplier ASML.