Jobs lost despite booming PV shipments in the US

Total PV module shipments in the US grew 43% in 2011 but employment fell by 10%, states a Department of Energy report. 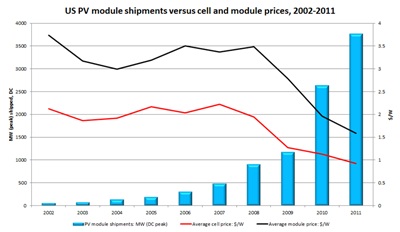 A new report on the US photovoltaics sector by the Department of Energy (DOE) shows that shipments of PV modules in the country jumped 43% last year, despite several high-profile bankruptcies and a fiercely competitive market.

According to the figures, compiled by the DOE’s Energy Information Administration (EIA), US-based firms shipped enough modules to produce 3.77 GW of peak DC power, up from 2.64 GW in 2010. That uptick reflects a sharp increase in demand across many geographies towards the end of 2011, ahead of subsidies, tax breaks and other incentives for the technology being phased out.

“Growth was spurred, in part, by declining PV cell and module prices caused by competitive pressures,” stated the EIA. “The solar Investment Tax Credit (ITC), and the 1603 Treasury Program in particular, which was set to expire on December 31, 2011, also supported this growth. Consequently, the solar industry rushed to construct projects by the end of 2011 as the deadline for the grant program drew near.”

Statistics from the European Photovoltaics Industry Association (EPIA) suggest that global PV installations grew at a much faster rate than US shipments over the same period, rising by around 76% from 16.8 GW in 2010 to 29.7 GW in 2011.

The EIA’s figures also show that PV modules capable of delivering a peak DC output of 1.16 GW were produced by US-manufacturers in 2011, up on the previous year but only by 9%, and indicating how US firms have lost market share in the face of competition from Chinese suppliers in particular.

Imports of PV modules reached 3.32 GW in 2011, with just over half of that total arriving from China, 21% from the Philippines and 16% from Malaysia (where First Solar has a large manufacturing facility).

Exports of PV modules totaled only 0.79 GW for the same year, less than a quarter of the import figure. Germany, historically the largest market for PV, accounted for nearly one-fifth of exports, ahead of Canada, Italy, France and India.

Thanks to their high conversion efficiency, the price of those cells is by far the most competitive of all PV technologies, measured at $0.36 per Watt for 2011, compared with $0.98 for crystalline silicon and $0.73 for thin-film material.

However, because of the additional complexity of the technology, that advantage is lost at the module level. The report states that the average price of CPV modules in 2011 was $1.32 per Watt, compared with $1.63 for crystalline silicon and only $1.28 for thin-film solar.

As a much less mature technology, CPV accounted for only 47.7 MW of US PV shipments in 2011, just 1.3% of the overall total. Crystalline silicon modules continued to dominate the market, accounting for 87% of shipments.

Overall, the figures translated to a US market for PV modules, including imports and exports, of just under $6 billion in 2011. Some $557 million of that total related to thin-film PV technology, and $63 million related to CPV modules. The value of the market for PV cells reached $1.7 billion.

Despite the tough market, the number of US companies reporting shipments of PV cells and modules to the DOE actually increased from 112 in 2010 to 120 last year, although the number of people employed (measured as full-time equivalent positions) by the sector did reflect the intense global competition, and decreased by nearly 10% year-on-year to just under 15,800.

Note that the DOE’s survey does not include any figures from PV installation companies, which employ a far greater number of people. According to the Solar Energy Industries Association, which represents US-based solar firms at all levels in the industry chain including installers, the sector now employs more than 100,000 people in the country.