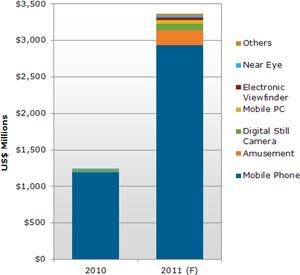 Analysts at NPD Displaysearch, the market research company specializing in displays technology, say that organic LED (OLED) screens are likely to have accounted for 12% of all small/medium-sized active-matrix displays last year.

That is double the 2010 level, and largely thanks to the efforts of the market leader – Samsung Mobile Displays – deploying the technology in a number of its high-profile smart phones, as well as its Galaxy Note and Tab tablet PCs. Unit AMOLED shipments are estimated to have risen 97% year-on-year to 90 million units, with the market growing even faster in terms of its dollar value.

Of that total, shipments of AMOLED displays larger than 3.5 inches in size are thought to have tripled in the first nine months of 2011 (compared with the same period in 2010), to nearly 60 million units.

NPD Displaysearch’s Hiroshi Hayase, VP of small/medium display research at the company, says that Samsung accounted for 97.5% of those shipments, although the electronics giant will increasingly find competition from its Korean rival LG Display, as well as the Taiwanese display manufacturers AU Optronics and Chi Mei Innolux (CMI) and a variety of new challengers in China.

Barrier to entry
However, the barrier to entry in AMOLED manufacturing is a high one, with another analyst company, IHS iSuppli, highlighting recently the difficulties of achieving good manufacturing yields to ensure efficient production. According to local media reports, both AUO and CMI have had scaling problems, although AUO is believed to be sampling its smart phone versions with a view to mass production in the first half of this year.

Hayase expects both AUO and CMI to begin shipping AMOLED displays for smart phones in 2012, while the technology is also poised to appear in non-handset applications. These include Sony’s PS-Vita portable games console (just released in Japan and due for a simultaneous European and US launch next month), and possibly in televisions too, as both LG and Samsung look to iron out the production difficulties that have thus far hampered the transfer of AMOLED technology to large-scale formats. 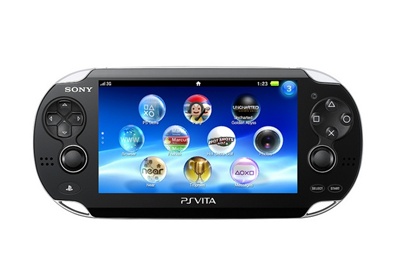 Overall, the NPD Displaysearch analysis suggests that the AMOLED market for small and medium-sized displays will be worth $3.36 billion in 2011 – up from around $1.25 billion in 2010, the year that Samsung’s AMOLED handsets first made a major impact.

That reflects a doubling of market penetration in small/medium displays for the technology from 6% in 2010 to 12% last year. Mobile phone handsets account for the vast majority of those shipments, with gaming, digital camera and near-eye microdisplay applications all using AMOLED technology but to a much lesser extent.