Biophotonics stocks punched above weight in 2011 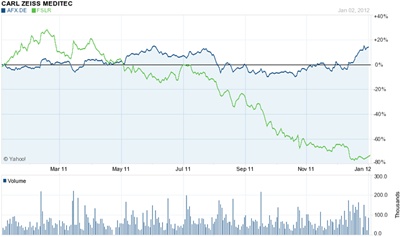 Last year will no doubt go down in history as one of turmoil on the stock market, with wild fluctuations throughout the year making life difficult for anybody trying to predict the future value of a listed company.

But after all that fluctuating, guess what – many of the leading indices ended up pretty much flat for the year overall. The S&P 500 ended up exactly where it began 2011, the Dow Jones Industrial Index finished it marginally up, and the Nasdaq composite was only 2% lower on December 30th than it was exactly a year earlier.

Two of the indices to show more solid growth for the calendar year were a pair of biotechnology-focused Nasdaq lists, and among photonics stocks a similar pattern emerged.

For the year to December 30 2011, stocks to beat the Nasdaq composite performance included Solta Medical (up 3%), Syneron (9%), Carl Zeiss Meditec (14%), Cynosure (15%), Spectranetics (40%), Biolase (49%) and Photomedex (117%). Now, many of those are small-cap stocks and subject to rapid fluctuations as well, but the sheer number of them, combined with the heavyweight presence of Germany-based Carl Zeiss Meditec, certainly suggests a growing confidence in biophotonics applications and businesses.

That's not to suggest that every biophotonics company did so well. In our survey of 56 photonics stocks, Iridex and Cutera showed a decline – of 5% and 10% respectively - while Palomar Medical Technologies was curiously down 35% for the year, despite winning a $31 million patent settlement with rival Syneron in September.

Solar carnage
The strong overall performance from medical laser and biophotonics companies was in stark contrast to the carnage in the photovoltaics sector, where many of the world’s leading manufacturers saw their valuations plummet by more than 80% as the full realization of the industry’s oversupply and price-slashing finally became clear.

In a slump that cost CEO Rob Gillette his job, First Solar was among the major losers in 2011, down nearly 75% after losing half of its value in Q3, and again in Q4. Its new management is pledging to focus on unsubsidized photovoltaic markets from now on, as subsidies in the major European markets are cut and demand growth slows.

One of the better-performing solar stocks in 2011 was SunPower – which suffered “only” a 51% slump in its valuation. Nevertheless, the deal to sell 60% of the company to French oil giant Total at a 50% premium to the market back in April now looks like a remarkable coup by SunPower’s management. And just before Christmas Total followed up that deal to raise its stake in SunPower to 66%, in an agreement that also saw Total’s fully-owned solar systems subsidiary Tenesol transfer to operate under SunPower.

Semicon rebound?
Despite a year that saw the semiconductor equipment market’s latest transition from boom to slump, the semiconductor stocks in our survey performed much better than most. Heavyweight lithography system vendor ASML saw its valuation grow 9%, with its major source supplier Cymer showing a similar return. Meanwhile KLA-Tencor and Ultratech both jumped by 25% in value – perhaps investors are now reflecting greater confidence in the transition to extreme ultraviolet (EUV) lithography that is expected to start in earnest in 2012, combined with a general industry recovery that has been pencilled in by some forecasters for the middle of the year.

Lithography firm Ultratech was one of the stand-out performers in the closing quarter of the year, rising 43%. Also making major gains at the end of the year was Zygo Corporation, up 53% in Q4 to register a gain of 44% for the year as a whole and to rate as the fourth-ranked photonics stock in 2011. Metrology and precision optics specialist Zygo has shown sustained improvement since the slump of early 2009, and at close to $18 on December 30, 2011, the stock is now nearing its highest valuation in more than a decade. 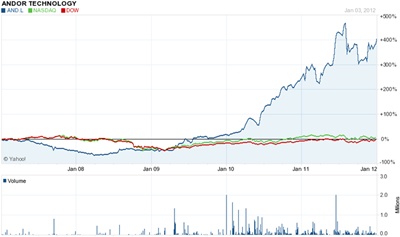 But perhaps the best long-term investment over the past few years has proved to be Andor Technology. The value of the Belfast-based maker of high-end cameras and detectors, which is now planning a major expansion, soared 46% in 2011. That placed it in third place on our list (behind only Photomedex and Biolase) and extended a startling run of form that will have yielded a ten-fold return for shareholders who invested in the company any time between late 2007 and early 2009.

The Queen’s University spin-out has delivered compound annual sales growth of 30% over the past 14 years, and after posting record figures in November 2011 the company revealed plans to invest £18 million in a growth strategy that includes acquisitions and targeting of new market sectors.

Laser makers bounce back
The closing quarter also proved to be a strong one for a number of the major laser vendors. Recovering GSI Group showed a 33% increase to end the year down only three points, while Newport and Coherent both gained more than 20% in Q4.

Industrial laser specialist Rofin-Sinar, which is investing heavily in a bid to challenge IPG Photonics in the fiber laser stakes, also rose 19% in Q4, but ended the year down more than one-third. Conversely, IPG lost ground in the final quarter but ended another year of rapid revenue growth with a 7% gain for shareholders.

Also struggling in the closing quarter of the year was the organic LED materials pioneer Universal Display Corporation (UDC). UDC has a very high valuation relative to sales - reflecting the long-term potential seen in the technology for both displays and lighting applications - but it appears that investor concerns over the details of a deal with key customer Samsung have weighed on the stock in recent weeks.