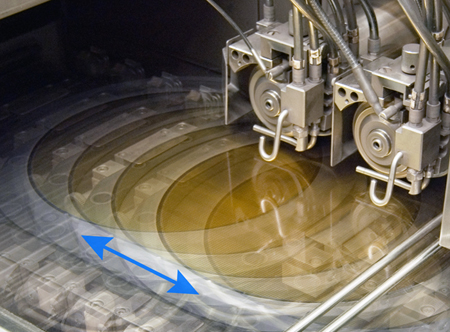 Conventional CMOS image sensors are not suitable for low-light applications such as fluorescence, since large pixels arranged in a matrix do not support high readout speeds. A new, patented optoelectronic device developed at the Fraunhofer Institute for Microelectronic Circuits and Systems, Duisburg, Germany, speeds up this process.

CMOS image sensors have long since been the solution of choice for digital cameras and camera-phones. They are much cheaper to produce than existing sensors and they are also superior in terms of power consumption and handling.

Consequently, leading manufacturers of cell-phone and digital cameras fit CMOS chips in their products almost without exception. This not only reduces the demands on the battery, it also makes increasingly smaller cameras possible.

Yet these optical semiconductor chips are now reaching their performance limits: while miniaturization in consumer electronics is leading to increasingly smaller pixels – around 1 micrometer across – certain applications require larger pixels in excess of 10 micrometers.

Particularly in areas where only minimal light is available, such as in X-ray photography or in astronomy, having a larger pixel area compensates for the lack of light. Pinned photodiodes (PPD) are used to convert the light signals into electrical pulses.

Werner Brockherde, head of department at the Fraunhofer Institute for Microelectronic Circuits and Systems IMS, told optics.org, “These optoelectric components are crucial for image processing and are built into the CMOS chips. Yet when the pixels exceed a certain size, the PPDs have a speed problem.” Low-light applications tend to call for high image rates. “But the readout speed using a PPD is too low,” he added.

The Fraunhofer team has now come up with a unique solution to this problem, which they have already patented. The scientists have developed a new optoelectronic component, which they have named the lateral drift field photodetector (LDPD). “In this component, the charge carriers generated by the incident light move at high speed to the readout node,” explains Brockherde.

With the conventional PPD the electrons will simply diffuse to the exit; a comparatively slow process but which is sufficient for many applications. “But by integrating an internal electric field into the photoactive region of the component, we have managed to accelerate this process by a factor of up to a hundred.”

To produce the new component, the Fraunhofer researchers improved upon the currently available CMOS chip manufacturing process, which is based on the 0.35 µm standard. “The additional LDPD component must not be allowed to impair the properties of the other components,” says Brockherde.

Using simulation calculations the experts managed to meet these requirements – and a prototype of the new high-speed CMOS image sensors is already available. “We expect to get approval for series production in 2013,” says Brockherde.

The high-speed CMOS sensors would be ideal candidates for applications that require larger pixels and a high readout speed: astronomy, spectroscopy or state-of-the-art X-ray photography are among the potential applications. But the sensors are also ideally suited for use as 3-D sensors based on the time-of-flight process, whereby light sources emit short pulses that are reflected by the objects.

The time-of-flight of the reflected light is then recorded by a sensor and used to create a fully-fledged 3-D image. This technology is a compelling proposition for applications such as crash avoidance, as the sensors can precisely record their environment in three dimensions. The Fraunhofer researchers have already developed this kind of area sensor based on the unique pixel configuration for TriDiCam GmbH.

TriDiCam GmbH develops robust 3D Time-of-Flight image sensors in close co-operation with the Fraunhofer Institute in Duisburg. TriDiCam comments that the integration of all relevant components on to a single chip enables the fabrication of compact, competitively-priced components that can handle 3D image concepts.