Laser giant sees early signs of recovery in the semiconductor sector, and hopes for credit easing in China. 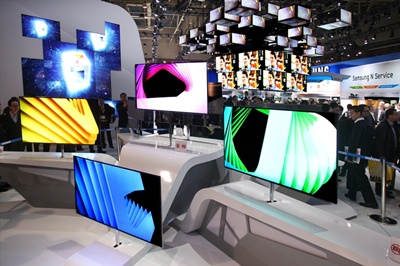 John Ambroseo, the CEO of laser giant Coherent, has told investors of a “palpable shift in customer sentiment” since the start of 2012, giving the company a boost after it reported a sequential dip in sales in the closing quarter of calendar 2011.

Noting early signs of a recovery in spending on semiconductor capital equipment, Ambroseo added: “The dialogue has improved in most of the commercial markets, which is the first step in a return to longer term growth.”

The CEO also commented at length on the emergence of organic LED televisions as a production-ready technology – even though it is not yet clear whether Coherent’s lasers will actually be used in the same glass annealing application for which it has found widespread use in the manufacture of smaller OLED displays for smart phones.

“If there was ever a coming out party, OLED TVs certainly had one in Las Vegas early this month,” Ambroseo said. In the latest quarter, Coherent received orders from two new customers in the flat-panel display (FPD) business, helping to push overall microelectronics orders up 34% sequentially to $100.3 million. However, these lasers will initially be used in low-temperature polysilicon (LTPS) LCD production, not OLED TVs.

In fact, Coherent has not factored in any sales of lasers for TV-sized OLED production to its revenue predictions. This is because their use in smaller versions of the technology relates to the improvement in screen clarity for displays viewed over short distances:

“For small-format OLED displays, the relationship between viewing distance and resolution that is enabled through laser annealing is critical to the user experience,” Ambroseo explained. “Large format displays viewed from a greater distance are much more tolerant and do not necessarily require laser annealing, which adds costs including additional upstream and downstream processes. For these reasons, we had not included OLED TVs in our revenue projections.”

Transistor options
Whether or not lasers will be used in OLED TV manufacture depends on the exact type of thin-film transistors (TFTs) that the electronics companies decide to implement, it seems. Ambroseo sees the leading technological candidate as metal-oxide TFTs, which require neither laser annealing nor additional doping. The problem is that metal-oxide TFTs are yet to be proved out at the production level, and so the CEO sees one of three scenarios unfolding as Samsung and LG prepare to roll out their new OLED TVs later this year.

The first – that the metal oxide issues are resolved in time for a large-scale roll-out this year – seems unlikely, but at the same time the price sensitivity of the TV market means that laser annealing is an equally unlikely long-term solution.

“The most likely scenario is for laser annealing to be used until a more cost effective solution is production ready,” the CEO said. “Any lasers sold for TV manufacturing would be incremental to the capacity required for small format OLED displays.”

Outside of the microelectronics sector, Coherent reported a slump in orders for lasers to be used in materials processing applications – with Ambroseo blaming continued worries over European debt and credit restrictions in China, which is now the real engine of growth for this particular element of the laser business.

With China’s inflation rate slipping back to around 6% recently, the CEO is hopeful that the central government will respond with credit-easing measures that will enable smaller enterprises in the country in particular to invest in lasers – both with Coherent directly and through engagements with the US firm’s OEM system partners in the materials processing area.

Coherent is also preparing to launch its first kilowatt-class fiber laser into the materials processing sector at some point this year, although it is not yet clear exactly when this will happen. At the Photonics West trade show last week, a black-box prototype version of its “1000FL” was on show and appeared bulkier than competitive new 1 kW lasers from both SPI (part of Trumpf) and Jenoptik. Aside from market-leading IPG Photonics, the kilowatt-class fiber laser space is set to get increasingly crowded, with Rofin-Sinar, JK Lasers (part of GSI Group) and JDSU also building up a presence.

Coherent forecast a slight increase in sales to between $191 million and $198 million for the current quarter, but with macroeconomic uncertainties still prevailing Ambroseo refused to be drawn on any predictions for the full year.