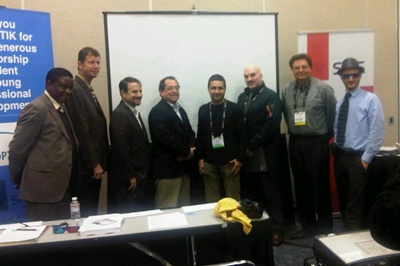 Serpa’s winning pitch detailed a proprietary laser device that has been developed to aid drug delivery through the skin. The pulsed laser is used to generate high-frequency ultrasound, which is said to painlessly create a temporary perforation in a patient’s skin - allowing medicine or cosmetics to be delivered effectively before the perforation closes up again after a couple of minutes.

According to Serpa, the market for so-called transdermal drugs is approximately 3% of the huge global pharmaceuticals market – equivalent to around $13 billion.

He sees three major markets for the LaserLeap approach - therapeutic, analgesic and cosmetic – with cosmetic applications the initial target market for the company.

So far, LaserLeap has developed prototype devices, and one attractive aspect to the judging panel was the potential for the company to adopt a “razor blade” business model by selling both the laser and the disposable devices that convert a laser pulse into ultrasonic waves.

As the overall competition winner, Serpa will attend the five-day UC Davis Biomedical Engineering Entrepreneurship Academy in July, along with three other runners-up from the Jenoptik-sponsored Photonics West competition.

Those runners-up were second-placed Babak Shadgan from the University of British Columbia, who is working on a near-infrared spectroscopy system to diagnose bladder dysfunction – an extremely common medical problem that is difficult and often traumatic to probe.

In joint third place and also attending the UC Davis academy were Daniel Gareau from the Rockefeller University and Scott Rowe from the company Ocular Prognostics. Gareau is working on a “robot pathologist” – actually a high-speed line-scanning confocal imaging microscope that is designed to diagnose melanoma, the most aggressive and deadly form of skin cancer, more quickly than other techniques such as optical coherence tomography.

Rowe’s pitch centered on a handheld device that can measure the thickness of the macular pigment – described by the entrepreneur as the eye’s “internal sunglasses”. A thinning layer of the pigment is associated with a high risk of developing age-related macular degeneration – the most common cause of blindness in the developed world. Rowe said that he needed around $2 million to develop initial prototypes of the device, which would be aimed at optometrists.

Last year’s competition winner, Hariharan Subramanian from Northwestern University, returned to the event to reveal that he has now set up a company called NanoCytomics with a view to commercializing his partial wave spectroscopic screening technique, which can be used to diagnose lung cancer through a simple cheek swab.