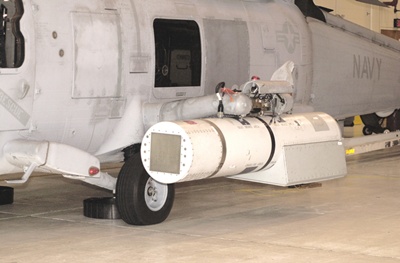 Japan’s Maritime Self-Defense Force has ordered four airborne laser mine detection systems (ALMDS) from Northrop Grumman – making it the first international navy to buy such systems directly from the US defense contractor.

It will use the helicopter-mountable technology to protect the country’s coastline and daily maritime traffic in and around Japan’s ports. The light detection and ranging (LIDAR) systems, which are around nine feet in length, feature a pulsed laser and streak tube receivers to detect, classify and localize sea mines moored close to the surface of the water.

According to Northrop Grumman, the ALMDS transmits a fan-shaped beam of laser light towards the water, which is then “swept” over the sea at the speed of the aircraft carrying the systems in a “push-broom” manner.

Four cameras are then used in conjunction with a target recognition algorithm to identify and store three-dimensional images of suspicious-looking objects just below the surface of the sea. Donna Carson-Jelley, ALMDS program manager at the US Navy, said in a Northrop Grumman statement:

“ALMDS will enable the Japan Martime Self-Defense Force to cover significant distances at the speed of flight using its MCH-101 aircraft. This technology dramatically compresses the time between mine detection and neutralization. ALMDS keeps mine countermeasures ahead of the threats.”

The US Navy has been using the ALMDS for several years, after the program to develop the technology first moved into the production and deployment phase in 2005. The system works in day and night conditions, and is equally capable of identifying and tracking large objects such as boat traffic, and small objects such as fish – as well as mines.

Northrop Grumman will work with Japan’s Kawasaki Heavy Industries and Fujitsu on the delivery and installation of the four ALMDS systems.

According to the defense contractor, ALMDS also has other applications, for example tracking suspected illegal aliens and monitoring the extent of oil spills.