A new grant to the Medical College of Wisconsin will fund further development of a technique to image individual retina cells. 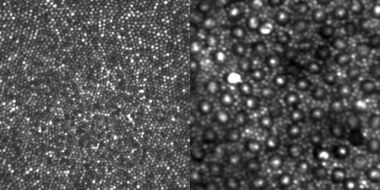 A four-year career development grant worth $250,000 from the voluntary health organization Research to Prevent Blindness has been awarded to the Medical College of Wisconsin (MCW), to support further development of a confocal adaptive optics technique that can allow visualization of individual cells in the human retina.

The instruments developed by MCW are based on the use of four afocal telescopes formed by pairs of off-axis spherical mirrors, with illumination provided by two superluminescent diodes. When correctly oriented in an instrument incorporating a deformable mirror, the system can compensate for astigmatism in the eye as well as for any inconsistency in the wavefront of the illuminating light.

As a result the device has been able to achieve an imaging resolution of nearly two microns, which is roughly the diameter of a single rod cell in the human eye.

Retinas contain both rod and cone cells, and although rods provide monochromatic images and contribute directly only to night vision, their health turns out to act as an early warning for a number of retinal diseases. Hence the interest in accurately imaging individual cells from organizations such as Research to Prevent Blindness, which funds research aimed at preventing a range of vision disorders.

"Ophthalmic adaptive optics has been used for over ten years, but until recently could only visualize cone photoreceptors in the central ten degrees of the retina," said Alf Dubra of MCW. "We can now resolve the smallest cones in the retina, which are at the foveal center and provide the highest spatial resolution to our visual system. More importantly from the clinical point of view, we can also now see the rod photoreceptor mosaic in a large number of subjects."

MCW is planning further improvements to the wavefront correctors and adaptive optics control algorithms, while continuing to work on making its instruments suitable for clinical environments. But the most important challenge has now become image processing and interpretation. Although images showing the retinal cell mosaics in vivo have enormous potential to impact the diagnosing and care of retinal disease, researchers are as yet not certain precisely which key metrics should be derived from the pictures. MCW and others are exploring the more obvious numbers to extract, such as cell density, but variability across individuals might be very large.

Other research is aimed at combining the image-sharpening capabilities of adaptive optics with other imaging modalities.

"Combining adaptive optics with optical coherence tomography could allow us to visualize the 95 percent of retinal cells that we cannot currently see because of their transparency, which could have tremendous implications for treating glaucoma, Parkinson’s and Alzheimer’s diseases," noted Dubra. "We also want to incorporate spectroscopy, and develop imaging techniques that detect changes in the retina chemistry before irreversible structural damage occurs."

The confocal scanning element of the MCW instrument sets it apart from the technique developed by Imagine Eyes, which also uses adaptive optics to compensate for imperfections in the eye's cornea and lens but which is based on a flood illumination camera. MCW's confocal instrument allows axial sectioning and enhances contrast in the final image, and the use of a confocal pinhole is said to produce better transverse resolution. The penalty is more complex image registration, but Dubra believes that the benefits make that a price worth paying.