The ALMA telescope project will soon be completed but new applications will more than compensate, says BCC Research 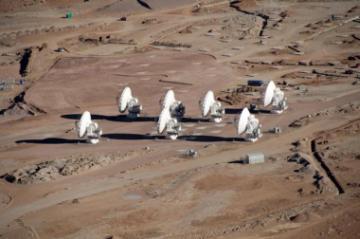 ALMA has been a significant driver of the total THz sector

The total market for terahertz systems was worth $83.7 million at the end of 2011, according to a new report from Massachusetts-based BCC Research, of which the bulk was associated with ALMA, the Atacama Large Millimeter/submillimeter Array under construction in Chile. As that project winds down, more diverse applications will start to appear, and the total market for the THz technology is set to expand over the coming years.

ALMA, an internationally funded observatory located 5000 meters above sea level, is said to be the largest and most complex astronomical project currently in progress. It will eventually feature an array of 66 radio antennae, scanning the sky at wavelengths between 0.3 to 9.6 mm. The telescope produced its first images in October 2011, even though only around one-third of the intended antennae are currently up and running.

The scale of the ALMA installation has meant that much of last year's total market for THz systems was closely linked to the astronomical imaging work underway there, according to BCC's figures. The same was true in 2010, when the market was worth a similar $82.8 million.

ALMA is due to be completed by the end of 2012, but new applications for THz systems will arise in the second half of the decade, taking up any slack and expanding the total market.

BCC expects that applications in public safety and security will help to grow the overall THz market to $125.5 million in 2016, and accelerating diversification in the second half of the decade should push that figure to an impressive $565 million by 2021.

Within those totals, BCC predicts that the THz imaging sector will grow slightly from $73 million in 2011 to $74.2 million in 2016, before expanding much more rapidly to $243.8 million by 2021. By then other sensors, such as THz biochips and moisture detectors, are likely to account for more than 30 percent of the total THz market, compared to their minimal presence today. Computer-related devices, primarily high-performance computer interconnects, should capture another 12 percent, and communications devices will account a further 10 percent.

Consequently the overall THz sector is expected to show a compound annual growth rate of 8.4 percent over the first half of the decade, before accelerating to a CAGR of more than 35 percent between 2016 and 2021.

• An indication of where THz technology might be headed came with the announcement by Technische Universität Darmstadt of a transmitter generating what is claimed to be the highest frequency ever attained by a microelectronic device. A team at TU Darmstadt’s Institute for Microwave Technology and Photonics used a resonance tunnel diode, designed in such a way that electromagnetic waves generated within a terahertz oscillator were repeatedly amplified rather than attenuated, to achieve a frequency of 1.111 THz. The same design principle should be able to generate frequencies up to 3 THz, according to the team.

• As evidence of the current market for THz imaging, Advanced Photonix has announced the sale of its T-Ray 4000 system to two companies in the Fortune 100 list. One customer is using the system to develop the quality control protocol for a packaged nutritional supplement product, while the other is using it to develop process and quality control protocols for inspection of its products. Both customers plan to deploy multiple systems on the manufacturing floor in the future, according to Advanced Photonix.