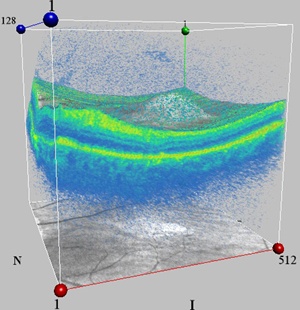 A looming patent litigation fight over optical coherence tomography (OCT) systems between the US subsidiary of Germany’s Carl Zeiss Meditec and the far smaller Californian company Optovue has been resolved with a cross-licensing agreement.

Terms of the deal are being kept secret, with the case judge ordering each company to pay for its own legal fees after all pending claims were dismissed.

Claims of patent infringement were initially brought by Carl Zeiss Meditec, Inc. in February 2010, with the company accusing Optovue of infringing two patents owned by the University of Miami that were exclusively licensed to the German company in April 2005.

US patents 7,301,644 and 7,505,142 both relate to ophthalmic applications of OCT, and in particular the use of the technique to acquire three-dimensional fundus intensity imagery – including a way to generate an en face view of the retina.

Carl Zeiss Meditec’s “Cirrus” high-definition OCT scanner, which uses the technique, is sold throughout the US, where it competes directly with Optovue’s RTVue product. Optovue says it has sold more than 2000 OCT systems, used in applications such as glaucoma analysis, to date.

Although Carl Zeiss Meditec had brought the case against Fremont-based Optovue, the smaller company, which launched the RTVue in 2006, had subsequently responded with its own counterclaims. A second and closely related case between the two was initiated late last year, and included a claim against the Massachusetts Institute of Technology (MIT) – the place where James Fujimoto pioneered the development of OCT technology. That second case centered on US patent 7,884,945, filed by Fujimoto and colleagues in early 2006.

In a brief joint release, the two companies said: “Under the terms of the agreement, the companies dismissed all currently pending litigation and entered into a cross-license agreement of certain issued and to-be issued patents owned or controlled by each party. The specific terms of the settlement are confidential.”