Chip and component maker could benefit from government-subsidized LED lighting in China and a major new streetlighting project in Taiwan. 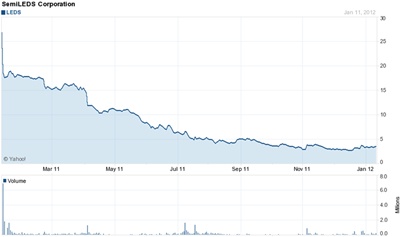 Wall Street-listed SemiLEDs, a manufacturer of LED chips and components with manufacturing facilities in China, is hopeful that a new support program for solid-state lighting in the country will help to revive its flagging sales.

The company has just reported a net loss of $7.7 million on sales of only $6.7 million for the three months that ended on November 30 (Q1 of its FY2012). Worryingly, those figures included a negative gross margin, with the cost of manufacturing its products higher than sales.

Though that represents an improvement on a sequential basis – CEO Trung Doan said that SemiLEDs had enjoyed some success in its pursuit of the indoor lighting market – the figures compare badly with the same period in 2010. A year ago, the company had posted a net profit of $3.8 million on sales of $13 million, with a gross margin of more than 50%.

But such is the competitive nature of the LED market that in the intervening 12 months, the average selling prices of both chips and components have been under heavy pressure.

“[While] we are pleased with our first-quarter results, not much has changed,” said the CEO in an investor call. “The industry remains very challenging. We believe the steps we are taking now will allow us to weather the storm and position us well for when the industry recovers.”

Margin pain
In echoes of the market dynamics seen in the photovoltaics industry over the past year, on one hand LED lighting is becoming ever more popular thanks to the downward price pressure, but on the other hand that trend is hurting manufacturers’ margins.

Asked by investors about current price trends, SemiLEDs said that it had seen average selling prices (ASPs) drop 10% in the reported quarter, adding that it expected a similar level of price erosion in the current quarter.

The tough market has meant that SemiLEDs has been unable to utilize its upgraded 4-inch wafer manufacturing facility in China to anywhere near its full extent, with utilization rates thought to be well below 50% overall.

But there are some more hopeful – albeit somewhat sketchy - signs for future business coming from Taiwan and mainland China, Doan said. The CEO pointed to local media reports of an announcement in December by the Taiwan Premier Wu Den-yi, in which NT$2 billion ($67 million) of government money will be handed to local authorities this year to help replace some 250,000 mercury vapor streetlights with LED equivalents.

China subsidies
Meanwhile in China there are suggestions that the country’s 12th “five-year plan” will include generous subsidies for LED lighting products. Responding to an analyst question, Doan indicated that subsidies on the order of 30% may be forthcoming.

In the past, the Chinese government has poured money into subsidies for the critical metal-organic chemical vapour deposition (MOCVD) equipment, mostly purchased from the two dominant Western suppliers Aixtron and Veeco, to support a huge expansion of LED manufacturing capacity in the country.

Exactly how much of that equipment has now entered production in China remains unclear. While there is strong pressure on LED chip prices, an even greater impact might have been expected if all of the equipment purchased was now up and running.

Nevertheless, the price of LED lamps in China has slumped in recent months. According to market analyst Ross Young at IMS Research, the ASP of LED lamps in the country reached just $11 in November – down a remarkable 62% in only two months.

That environment is making life difficult for SemiLEDs, with the company among the worst performers in optics.org’s 2011 survey of photonics stocks. Since its late-2010 initial public offering (IPO) of stock, SemiLEDs investors have seen more than 80% wiped off of the value of the company. As of January 11, it was trading with a market capitalization of just under $100 million, while its November 30 balance sheet showed cash and equivalents of nearly $74 million and only a small amount of net debt.