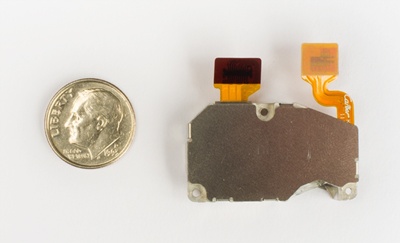 Soraa, the start-up company specializing in high-performance blue and green semiconductor lasers, has demonstrated a desktop projector featuring high-power blue devices based on its novel technology.

The company is showcasing the approach at this year’s Consumer Electronics Show (CES) in Las Vegas, the event where the world’s leading electronics brands (except for Apple) traditionally unveil their latest innovations for the consumer market.

Now based further north in Fremont and headed up by CEO Eric Kim, previously an executive at both Intel and Samsung, the start-up has just received a huge injection of new finance, raising $88.6 million in an equity deal in late 2011 featuring the venture firm New Enterprise Associates. Khosla Ventures is another high-profile investor in the firm.

According to Soraa, the CES demonstration represents the first time that high-power semi-polar and nonpolar InGaN devices – adapted semiconductor structures that are grown in a different crystal plane to “regular” GaN-based lasers and LEDs, and which offer much greater efficiency and versatility – have appeared in the emerging application. In particular, the Soraa approach provides a way to make laser diodes that emit in the green, instead of relying on frequency conversion of conventional infrared emitters.

So far, the company has shown a blue laser diode array with a continuous-wave output of more than 4 W when operating in multi spatial and spectral mode, while its green laser devices can produce more than 100 mW in continuous-wave when operating in single spatial mode. “The devices can be directly modulated at high speeds required for high-resolution displays with minimal speckle,” it claims.

Green diode availability
Desktop and handheld, or so-called “pico”, projectors based on either LEDs or laser diodes have become a recurring theme at the CES show. Redmond, Washington, based MicroVision is one projector company that could use a volume supplier of direct green laser diodes, and at this year’s CES it has launched a new generation of its “PicoP” display engine that incorporates the technology.

The direct green diodes remain expensive right now, as they are not yet widely available – although that situation could change this year. MicroVision CEO Alexander Tokman says: “With the market availability of direct green laser diodes expected this year, we are working steadily with our partners to help develop the next generation of consumer, commercial and automotive applications that deliver an unmatched big-screen experience from a tiny package.”

MicroVision says it plans to begin providing early samples of the PicoP Gen2 HD laser display engine to selected OEMs for their own testing and evaluation, starting in Q1 2012.

Another CES exhibitor, Massachusetts-based Luminus Devices, is showing off an alternative approach based on a hybrid laser/LED design that incorporates its own large-sized red and blue LED chips to deliver a 4000 lumen output.

Luminus is aiming that technology at the more conventional projector market, for use in teaching and business. The company’s director of global product marketing Stephane Bellosguardo said: “Luminus is now demonstrating that we are well positioned to expand in the mainstream front projector market, which is forecast to grow to over nine million units per year by 2013.”