The growing use of femtosecond sources for ophthalmology features in the FDA's list for the last months of the year. 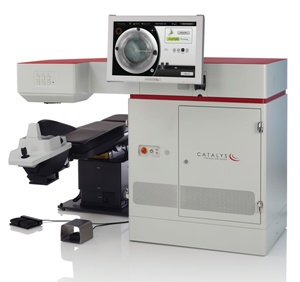 The Catalys system from OptiMedica

A selection of the photonics-based devices awarded 510(k) clearance by the US Food and Drug Administration at the end of 2011, indicating that the regulators have approved the instrument for use in the United States.

Ophthalmology
As reported by optics.org, the Catalys system developed by California-based OptiMedica has received approval for use in cataract surgery, further proof that the use of femtosecond sources for such procedures is on course to become a significant market sector. The same system received its CE mark approval earlier in 2011, allowing the system to be marketed in the European Union. OptiMedica announced in December 2011 that patients at the University Eye Clinic Bochum, Germany, had been the first in Europe to be treated for cataract surgery using Catalys.

Technolas Perfect Vision has received approval for its Femtec laser system for anterior capsulotomy, the critical first stage of a cataract removal procedure in which an incision is made through the membrane surrounding the lens. Technolas PV, headquartered in Munich, has previously marketed laser products under the Femtec name for refractive surgery, rather than cataract procedures. The Victus platform, a femtosecond-laser-based system developed by Technolas PV along with Bausch + Lomb to treat cataract, refractive and therapeutic procedures on the same platform, was unveiled in September 2011. First established as a joint-venture between Bausch + Lomb and 20/10 Perfect Vision, Technolas PV is now under the full control of B+L.

The LightLas multi-wavelength medical laser manufactured by Taiwan-based Lightmed is a dual-wavelength source for treatment of retina diseases through photocoagulation. Using a laser to deliberately clot blood vessels in the retina in a controlled fashion is known to be a way to prevent the spread of diabetic retinopathy, and a LightLas instrument operating at 532 nm for this purpose is already available. The newly-approved multi-wavelength instrument can supply 532 nm along with 670 nm, another wavelength that is often used for this procedure.

Dentistry
China Daheng Group's PenLase system has been approved for the standard range of dental laser procedures, including incision, excision and vaporization of soft tissues. It delivers a beam of 0.7 or 1.7 W at 810 nm. In line with other biophotonics sectors, the dental laser market finished 2011 on a healthy note: Shares in Biolase, a leading dental laser supplier with a turbulent corporate history and ambitions to expand into ophthalmology, ended the year up 49 percent.

Cosmetic and therapeutic applications
Palomar Medical Products, Massachusetts, has added to its range of cosmetic lasers and pulsed light systems with the approval of its Emerge fractional laser product. Emerge is intended for use in dermatological procedures requiring coagulation of soft tissue and skin resurfacing procedures, along with the treatment of facial wrinkles and fine lines.

Biolitec, also of Massachusetts, has received approval for an addition to its line of ELVeS instruments intended to treat venous reflux disease. A number of laser-diode-based systems are available in this area of aesthetic medical treatments, which involves using a laser's infra-red radiation to contract the greater saphenous vein in the thigh and combat superficial vein reflux.