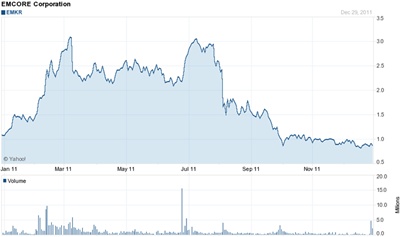 US-based Emcore, which makes fiber-optic components for telecom and defense applications and multi-junction solar cells, has taken a number of measures to maintain liquidity as it seeks to re-establish production lines damaged in the recent Thailand floods.

Around half of the company’s fiber-optic component revenues relied on production by contract manufacturing partner Fabrinet, which made devices like tunable lasers and XFP modules at its Chokchai site.

In late October, flood waters hit Chokchai, leaving the Emcore production area under several feet of water for more than a month (Emcore’s solar cells are manufactured elsewhere and were unaffected).

Salary cuts
The immediate impact of the disaster on the company’s finances will be seen in Emcore’s next set of results. Reporting sales of $52.1 million for the quarter that ended on September 30 – before the floods hit - CEO Hong Hou forecast that total sales in the December quarter would slump to between $36 million and $38 million.

With Emcore’s balance sheet already looking thin (the company posted a net loss of $14.3 million in the September quarter, leaving it with only $15.6 million in cash and equivalents) even before the disaster in Thailand, investors taking part in a conference call with executives on December 27 were understandably concerned about the firm’s near-term liquidity.

But Hou and CFO Mark Weinswig said that a series of measures taken in the past two months, combined with insurance pay-outs relating to the floods and the interruption to Emcore’s business, would cover the additional capital outlays now needed to re-establish its production capability.

Those measures include temporary cuts to salaries and discretionary spending to preserve cash, pre-payments from customers for future product shipments, and a $14 million increase to Emcore’s credit availability through an amended deal with Wells Fargo Bank that sees the company add assets including machinery and real estate to the agreement and borrow at a 1% higher interest rate in 2012.

“We expect to come out of the disaster a stronger company compared with pre-flood conditions,” said Hou. The CEO also said that Emcore would not need to access the equity market in the short term, even though it recently set up an equity line of credit arrangement under which it may sell up to $50 million in shares of common stock.

But the priority is to re-establish its manufacturing footprint: “We expect to rebuild production capacity for our CATV business by the end of March 2012, and rebuild the production capacity of our telecom production lines before the end of May 2012,” stated the company. CEO Hou added that while he always knew that Emcore would be able to build its production back up, his biggest concern was whether customers would be there to purchase its products by the time that happened. “I’m happy they will,” he said.

Photovoltaics boost
Emcore’s solar and terrestrial photovoltaics businesses are unaffected by the floods, with high-efficiency solar cells manufactured at the company’s Albuquerque headquarters and concentrated photovoltaic (CPV) modules through its “Suncore” joint venture in China.

Happily, the PV side of Emcore’s business showed strong growth in the quarter ended September 30, with revenues of $21.2 million at a record high and up 30% sequentially. Hou said that the outlook for space-based PV remained “robust”, with several new contract awards expected in 2012. On the terrestrial CPV side, Suncore has recently moved into a new production facility in China that will ultimately boast a module manufacturing capacity of 200 MW per year.

With processes now being qualified, Hou says that production is slated to begin in February 2012, while Suncore recently completed a 2 MW CPV installation that is about to be connected to the grid. Small-scale installations are also on the agenda, following Emcore’s low-cost acquisition of the assets belonging to failed rooftop CPV specialist Soliant Energy earlier this year.

Suncore, which has received substantial financial backing from Chinese government authorities, has also said that it has a 50 MW follow-on order for CPV deployments in China during 2012, for which Emcore will be the exclusive supplier of multi-junction cells. Hou said that pre-payment for these cells was one of the agreements helping to boost the company’s short-term cash position.

In fact, with demand for its solar cells growing, Emcore will increase production capacity at its Albuquerque facility with the purchase of new manufacturing equipment, despite its near-term distractions.

For the fiscal year ended September 30, Emcore posted sales of $200.9 million, up 5% on the prior year, with $125.6 million relating to fiber-optic products and $75.3 million attributed to PV sales. Despite the sales increase, its net loss widened to $34.2 million.

Following the latest financial release, investors seemed to react positively and Emcore shares initially rose sharply – albeit from a very low base – to $1.15, before sinking back to wipe out that gain. In early trading on December 30, the stock was valued at $0.87, equivalent to a market capitalization of just over $80 million.