Russian company releases first 60 W replacement product in its domestic market, with a global launch and price reduction slated for 2012. 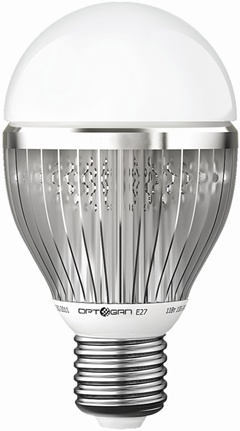 Optogan, the Russia-headquartered manufacturer of LED chips, components and luminaires, has launched a solid-state replacement for 60 W incandescent bulbs in its domestic market.

Available initially in the company’s home city of St Petersburg and also Moscow, the E27 bulbs will go on sale at a price of 995 Rubles (around $33). OptoGaN says that it will then introduce the bulb to the global market in early 2012 at a price of around €30.

Based on LED chips fabricated at its epitaxy and front-end manufacturing site in Landshut, Germany, with back-end production in St Petersburg, the E27’s key figures of merit include a luminous flux of 720 lumens, 11 W power consumption and a warm-white correlated color temperature (CCT) of 3050 K.

That translates to an efficacy of 65 lm/W, while Optogan quotes its color rendering index (CRI), an important measure of light quality, at 80. The lamp’s performance compares well with some other LED ‘bulbs’ now available, and is priced competitively, although it would not meet the very stringent criteria set by the US Department of Energy’s “L Prize” for 60 W replacements.

Those criteria include an efficacy of at least 90 lm/W, more than 900 lumens output, a CRI of at least 90 and a CCT of 2700-3000 K, and have proved to be so tough that only one company – Philips – has officially been able to meet them so far.

Optogan designed its E27 in collaboration with the art.lebedev studio in Moscow, with Maxim Odnoblyudov, president of Optogan, commenting: “[The] E27 is the fruit of the work of leading European scientists combining world-class technology and creative development of Russia’s leading design studios.”

“The vertically integrated manufacturing structure of Optogan allows us to control quality at every stage of production, from the German chip manufacturing to packaging and assembly of the final product in St Petersburg,” he added.

Optogan says that it expects demand for its LED lighting products to start with industrial and office applications, where lights are ‘on’ more of the time, and the new lamps can offer a faster pay-back period. Retail use is then expected to kick in from 2013 onwards.

That will in part be thanks to future price reductions. Optogan aims to launch a 40 W replacement for around $13 by mid-2012, and a lower-cost 60 W replacement by the end of next year: "We believe that the wave of replacement will be starting around the tipping point of $20," said Optogan's international sales director Ove Sörensen. "By the end of 2012 we would like to be able to offer our end customers a 60 W replacement lamp with a targeted price of around $15."

Optogan is also working on a 75 W replacement bulb, which it expects to release by the middle of next year.

$15 LED bulb set for Indian launch
News of the Russian company’s launch comes shortly after US-based Lighting Science Group (LSG) and the Indian firm Dixon Technologies said that they would jointly launch an LED-based replacement for A19 60 W bulbs that would shortly be available for less than $15 in India.

In a statement announcing the development of the low-cost bulbs – expected to be launched in India by the end of the year, with a global roll-out in early 2012 - Atul Lall, the deputy managing director of Dixon Technologies, said: “The economic and environmental implications of this partnership are significant: old-style light bulbs use 60 billion units of electricity each year, 7% of India’s total, and our Lighting Science Group ‘Definity’ lamps could save over 70% of that, equivalent to 32 coal fired plants with 500 MW capacity.”

LSG expects to begin selling the A19 equivalent around the world next year, while the two companies are also collaborating on LED-based streetlights and industrial light fixtures. Its CEO Jim Haworth said, “By utilizing Dixon Technologies’ manufacturing facilities in Noida, we’ll be able meet the expected strong demand from individuals, businesses and government in India and I expect that our LED lighting products - particularly the new 60 W equivalent bulb - will quickly become some of the best-selling lighting products in the world.”