An army of researchers might be working on organic PV cells, but don't expect a major market to develop this side of 2020. 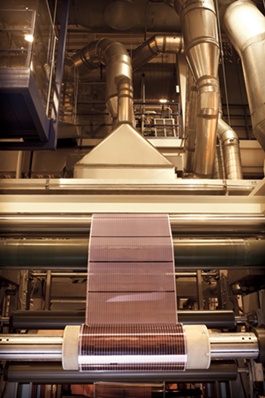 As the dust settles on Solyndra’s high-profile failure to crack the photovoltaics market – at least in the company’s current guise, ahead of any potential restructure – the ability of novel PV technologies to compete with the entrenched silicon and CdTe approaches that dominate the scene is in question.

With the exception of First Solar, China’s government and major PV players have moved to corner the market through a widespread capacity expansion that has seen the price of silicon PV plummet this year on the back of reduced subsidies and the knock-on impact on demand. While it’s true that Solyndra had a very radical technology – not just CIGS, but CIGS deposited inside cylindrical glass tubes – the failure of a company backed so heavily by both private and public finance is enough to make you wonder just how those entrenched technologies can be challenged.

At last month’s SPIE-hosted Optics + Photonics conference in San Diego, California, many of the hottest photonics research topics were under discussion, with world-leading groups describing their advances in technologies ranging from hyperspectral imaging to the potential optoelectronic applications of silk (as an interface for mapping brain activity, since you ask).

One of the themes attracting plenty of attention was the latest work in organic electronics – in the form of light-emitting and energy harvesting materials. There’s no shortage of effort going into the emerging field of organic PV, from the university level, through a growing number of OPV start-ups and a handful of heavyweight materials companies eyeing a potentially very lucrative future market.

Efficiency advances
On paper, recent advances look impressive. Plenary speaker Sean Shaheen from the University of Denver highlighted recent reports of Mitsubishi Chemical’s development of an OPV material showing a record-breaking conversion efficiency of more than 10% as evidence of the kind of progress now being made.

If confirmed and demonstrated in a cell form, that would represent a significant improvement on the previous best of just over 8%, demonstrated by the US start-up Konarka Technologies and Solarmer Energy, and Germany-based Heliatek. At that kind of conversion efficiency, the low capital cost of manufacturing organic compounds ought to offer a strong basis for future commercial success.

Konarka was another to present its recent advances at the event. In a session on the issues and challenges for commercialization of OPV, the company’s VP of product and process development Eitan Zeira highlighted what is perhaps the single biggest issue – the conversion efficiency of cells manufactured in volume.

As has been the case with other solar technologies, with OPV there has been a lot of focus on the performance of the “champion” cells that make for good headlines. Konarka and Heliatek have both shared in that exposure, having each produced cells with a world-record efficiency of 8.3% in recent months.

That figure now appears to have been eclipsed by the Mitsubishi Chemical effort. But in all cases, champion cell performance can distract from the more prosaic – but ultimately far more important – question of what can be manufactured reliably, in large volumes and at a sufficiently low cost to off-set the lower efficiency of organic PV versus the much more commercially advanced silicon, CdTe and CIGS materials that dominate the market.

Zeira indicated that Konarka, now a company with around 100 employees, would soon have a manufacturing capacity of 1 GW (peak output) – equivalent to about 5% of the annual global market for PV installations right now. But the cells that Konarka will produce in volume are not going to be operating anywhere close to the “champion” level – instead, a typical efficiency would be more like 4%. 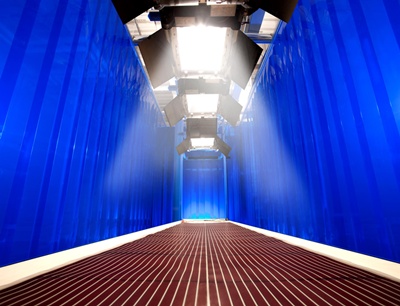 Scaling headaches
As Zeira pointed out in some detail, scaling up is a big headache for OPV. Large runs require more starting material, and with this come problems with morphology, and reliable techniques for quality control just don’t exist yet. Lifetime is another issue – organic materials have lots of degradation pathways, and OPV certainly can’t offer anything like the 20 or 25 year guarantees that other PV technologies have had to include to provide the all-important bankability factor. Depending on the exact nature and location of the installation, OPV module lifetimes of between three and five years are about the limit of what can be offered right now.

But the lure of a technology with such relatively low up-front capital costs (large-scale OPV production could in theory leverage the infrastructure previously used widely for photographic film manufacturing), hopeful investors have backed plenty of start-ups.

One of those is Solarmer, another company presenting at O+P. Founded in 2006 off the back of technology licensed from the University of Chicago and UCLA, its research team recently delivered its own champion cell, with an efficiency of more than 8%. But the cell is extremely small, while Yue Wu from the company highlighted its stability as the major technical challenge. With such critical issues as replacing ITO as the contact material still to be resolved (Solarmer’s initial efforts with a suitable replacement have yielded cells with around 2.5% efficiency), there is clearly much work still to be done.

While virtually all of the current OPV cell producers are start-ups or university spin-outs, what is noticeable about the fledgling industry is that it has attracted some very large chemicals firms, among them BASF, Merck and Mitsubishi Chemical.

Reality check
BASF’s Mathieu Turbiez was keen to issue something of a reality check at a panel session on OPV in San Diego. He sees the big challenge as one of material reproducibility, telling delegates that “record efficiencies are fine, but that doesn’t make a product”.

As Turbiez admitted, having lots of new OPV customers, even if they are small, is no bad thing for BASF. But in the longer term what the company needs is to be able to anticipate its customers’ requirements and volume demand accurately, so that it can scale up its own production capacity without undue risk. For that, a very close relationship between the chemical supplier and the cell manufacturers will be needed. On top of that are key requirements in terms of quality management and materials analysis – largely unknown quantities at present.

Illustrating the problem, he pointed out that BASF had been approached to produce at least 35 photoactive polymers for customers. Just how many of those are likely to end up as chemicals that will be available in the anticipated large volumes of the future? Certainly not many. “We need to close the gap between researchers and reality,” he said.

While Konarka’s capacity may be growing, large-scale OPV installations remain few and far between right now. One of the company’s largest to date is attached to two faces of a building in Florida, where it produces around 90 kWh per month – only enough to run about fifteen 60 W light bulbs for a week.

That’s not to say that OPV will not play a role in the future solar electricity market. As Zeira sees it, one thing that the technology will certainly offer is an additional aesthetic element to PV generation – thus allowing sales at a premium to the more conventional PV technologies that are undeniably devoid of much aesthetic quality. The question is how much is that aesthetic value going to be worth, and what other markets can OPV penetrate before economies of scale kick in and materials are stable, processes reproducible, and products reliable?

Solarmer sees portable electronics, products like Amazon’s Kindle, as the first application market, followed by building-integrated PV and even powering greenhouses. Konarka sees a market worth up to $200 million just for solar phone chargers – and anticipates a real near-term opportunity for this application in Africa, where handset use has boomed but users have to travel far just to charge their phones because of the undeveloped grid infrastructure. 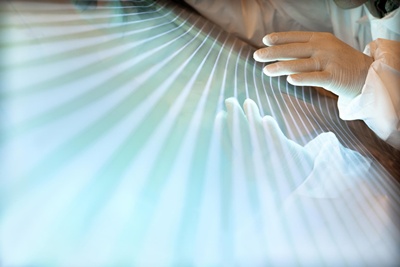 Time to collaborate?
But to make an impact in mainstream solar, where does OPV cell efficiency need to be? Opinions differ wildly – Konarka’s Zeira reckons that if 7% efficiency can be reached in volume, then OPV blows all the other solar technologies out of the water. Industry analysts at Nanomarkets seem to agree, predicting a huge market for the technology by mid-decade. But that sentiment is not shared at Lux Research, where the current thinking is that even at current champion-cell efficiencies, OPV will remain stuck in a niche until 2020, finding use only in applications where very lightweight, flexible products have an advantage – such as the military and some portable electronics.

Lux’s thesis is that despite the much lower capital equipment and production costs inherent to OPV, manufacturers will be working against a trend that will see silicon and thin-film PV costs continue to fall quickly, wiping out OPV’s theoretical cost advantage before the end of the decade, which is how long it could take before many of the OPV scaling issues are fixed. “By the time we have large-scale production of OPV, crystalline silicon PV could be living without subsidies,” was one comment made at the OPV panel session that echoed that analysis, and which will have extra resonance in the wake of Solyndra’s demise.

One lesson from both the silicon CMOS and PV industries is the degree to which costs can be slashed through standardized manufacturing and materials, but OPV is at such an early stage of development that the market’s requirements are highly fragmented, and will remain that way until either standards are implemented or the number of manufacturers is reduced through consolidation.

As BASF’s Turbiez noted, even the largest chemical companies would be unable to supply ten different types of OPV material in volume – describing such a situation as “totally unrealistic”. Scaling up the production of just one polymer represents enough of a challenge, and he thinks that a maximum of three such materials is feasible.

To get around that problem, competitors may need to work together to establish the necessary level of demand required for the chemical companies. This scenario would mean that, rather than differentiating their products through the materials that they use, cell manufacturers would need their process to become the major differentiator as they look to scale operations.

And that’s a challenge that should not be underestimated: ambitious OPV companies need only look at the fate of Solyndra to see how badly things can go wrong.