The German photonics giant says that it will invest €10 million in a state-of-the-art facility. 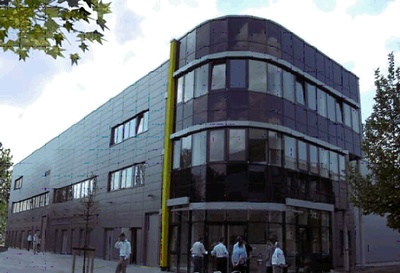 Jenoptik, the manufacturer of lasers and optical systems headquartered in Jena, is to invest €10 million in an expansion of laser diode production at its manufacturing facility in Berlin-Adlershof, adding jobs and more than doubling output by early 2013.

Although the company won’t reveal the new level of production capacity expected following the investment, it did tell optics.org that it will move its manufacturing from a 3-inch gallium arsenide (GaAs) semiconductor wafer process used currently onto a new 4-inch platform.

Using the larger wafer size will enable much of the scale-up, since nearly twice as many laser chips can be fabricated on a 4-inch wafer than is possible on the existing 3-inch platform. The laser structures will be grown by metal-organic chemical vapor deposition (MOCVD), as is the case currently.

Jenoptik says that the current production facility has already hit its capacity limit, and with demand for laser bars growing rapidly – particularly from customers in Asia – the additional investment will be needed for thin-disk, fiber laser and direct diode systems, all of which are growing in popularity and usurping older laser technologies such as lamp-pumped solid-state lasers.

“With this investment we are expanding our position as a global leader in this market segment,” said Michael Mertin, the Jenoptik chairman. “We will also be reaching unit volumes that will enable us to not only achieve economies of scale, but also a highly automated and state-of-the-art production process.” Manufacturing on a 4-inch wafer platform means that more advanced semiconductor equipment can be used at the various production stages, which should in turn improve production yields and manufacturing efficiencies.

The investment has in part been financed by last year's sale of the Jena-Optonik division to defense giant EADS Astrium. At the time, Jenoptik said that some of the expected €25 million proceeds of the sale would be used to expand laser diode production.

Fiber demand?
News of the expansion comes shortly after Jenoptik announced a new licensing deal with IMRA America covering fiber lasers that will allow the German company to target high-power applications, and automotive manufacturing in particular. To build those high-power lasers, the company will need a larger supply of the diodes that provide the raw optical power to the system.

Although much of the output from the Berlin-Adlershof fab is sold to customers worldwide, having control of the vertical supply chain in this way is seen as a major advantage for fiber laser companies – and is one of the key reasons why IPG Photonics has been able to dominate the emerging market with competitively priced products. However, IPG produces its laser diode structures using a different deposition method, molecular beam epitaxy (MBE).

Jenoptik develops the optoelectronic structures used in its lasers in close collaboration with the Ferdinand-Braun Institute, part of the Leibniz Institute for High-Frequency Technology. Jenoptik Diode Lab was created in 2002 as a spin-off of the institute, while Jenoptik’s fab in Berlin-Adlershof began production in 2006.

The fab currently employs 70 people. Although Jenoptik says that more jobs will be created as a result of the latest investment, it declined to say how many, other than to note that it would not scale with the increased laser diode production levels. The larger wafer sizes and advanced automation will likely account for much of the increased production.