Department of Energy hands out funding to 69 projects under its high-profile SunShot Initiative. 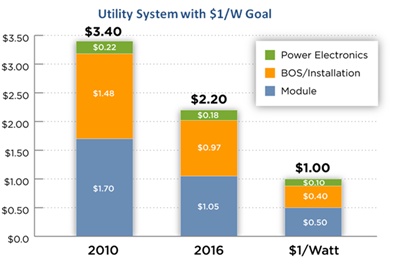 The US Department of Energy (DOE), under fire following the much-publicized bankruptcy announcement of loan guarantee recipient Solyndra, has awarded $145 million to aid the development of advanced solar power technologies.

No fewer than 69 different projects are funded under the latest part of the scheme, which is aiming to make solar energy costs directly competitive with conventional sources by the end of the decade.

The projects are largely focused on reducing the cost of existing solar technology. Eighteen of the awards are aimed at doing that by improving the efficiency of photovoltaic cells, with another 23 trying to develop more radical next-generation cell technologies using novel and Earth-abundant materials.

While the largest single chunk of funding, $42 million, will go towards reducing balance-of-system costs (i.e. the parts excluding photovoltaic cells and panels), $35.8 million has been earmarked for closing the gap that currently exists between the efficiencies of prototype cells developed in the laboratory, and of those same cell types when produced in volume.

Most of the cell efficiency improvement projects will receive $1.5 million from the DOE to improve the manufacturability of thin-film CdTe, CIGS and silicon cells. Stand-out projects include $6.2 million for the US National Renewable Energy Laboratory (NREL) to develop high-efficiency CIGS, and $4.6 million to Hillsboro-based Solar World Industries America to develop laser processing techniques for high-efficiency thin-film silicon cells.

Next-gen cell technologies
The 23 projects funded under the “transformational PV science and technology” category, designed to deliver entirely new classes of low-cost commercial PV, will receive an aggregate $22.2 million from the DOE. Most of the projects will get $750,000. The recipients include the Woburn, Massachusetts, company Bandgap Engineering, whose goal is to produce cells based on arrays of silicon nanowires with an efficiency of 36%, and a Purdue University team looking to develop solar inks based on copper, zinc, tin and sulfur. Meanwhile the University of California, Irvine, will work to develop a 10% efficiency cell based on iron pyrite, the material also known as fool’s gold.

Largely absent from the list of newly funded projects are developments based on organic PV – aside from a Princeton University group that will look into depositing organic PV materials onto silicon to produce high-efficiency hybrid cells, and a University of Michigan team working on tandem cells based on small-molecule systems.

The apparent sidelining of organic PV may reflect a view that, while promising as a low-cost technology for off-grid applications, there remain very significant technical and commercial challenges before the approach can seriously compete for a share of the mainstream PV market.

At last week’s SPIE Optics + Photonics conference in San Diego, NREL’s Martha Symko-Davies highlighted that vendors of rooftop or large-scale PV needed to be able to offer 20-year guarantees on their products – but with serious question marks still remaining over the reliability and durability of organic PV, coupled with the difficulty of transferring the promise of high-efficiency (8%) champion cells into a repeatable volume manufacturing process, that is not currently feasible.

As a result, the technology is expected to remain very much in a niche for at least the next five years, and probably into the next decade. Where it may find some success before then is in applications such as back-up power for consumer electronic products, where a 20-year guarantee is not required. 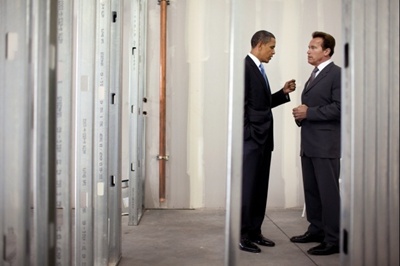 Solyndra impact
The DOE announced the latest SunShot funding awards as it came under criticism following news that the high-profile CIGS module producer Solyndra was about to file for bankruptcy. The Californian company has been held up by the Obama administration as a leading light of the ‘green revolution’ – it was the very first recipient of a DOE loan guarantee, and the subject of visits by Energy Secretary Steven Chu, former state governor Arnold Schwarzenegger and President Obama himself.

With so much financial and political capital invested in the company, opponents of the DOE’s loan guarantee scheme have been quick to criticize the decision to back Solyndra’s unusual technology, rather than more conventional approaches to PV. But in a White House press briefing on September 1, Press Secretary Jay Carney defended the $535 million Solyndra loan guarantee awarded in September 2009 under the American Recovery and Reinvestment Act, saying:

“The whole purpose of this program, which has a broad portfolio of many companies that are doing well, was to invest in cutting-edge technologies that with some government assistance, with some government loan guarantees, would help us establish a beachhead in vital industries that will allow America to compete in the future.”

“There are no guarantees in the business world about success and failure,” Carney continued. “That is just the way business works, and everyone recognizes that. And that’s why -- there’s over 40 companies, as I understand it, 40 guarantees involved in this program that merit looking at. There’s no individual -- you cannot measure the success based on one company or the other.”

Other solar projects backed with loan guarantees include three huge PV farms being built by First Solar, the largest-ever concentrated PV (CPV) projects, and the development of a low-cost silicon wafer manufacturing tool by 1366 Technologies that enables production of a solar wafer directly from a silicon melt – rather than through the multi-step, energy-intensive and wasteful process currently used.