Organic electronics, concentrated PV and collision-avoidance systems are nominated for the 2011 Deutscher Zukunftspreis.

All three teams nominated for the prestigious Deutscher Zukunftspreis (German Future Prize) this year are rooted firmly in optics and photonics – demonstrating the enabling nature of the technology, and further reinforcing Germany’s recognition of its impact.

At the official nomination ceremony, which took place August 27 at the IdeenExpo in Hannover and was attended by Germany’s federal president Christian Wulff, the prize committee revealed a shortlist featuring teams behind the development of organic LED and PV materials, optical collision avoidance systems, and concentrated photovoltaics (CPV).

The three nominated teams are: the automotive giant Daimler; the Technical University Dresden and its two spin-offs Heliatek and Novaled; and the Fraunhofer Institute for Solar Energy Systems (ISE), alongside Azur Space and Soitec Solar. The eventual winner will receive €250,000 when the award is presented on December 14.

Daimler team – optical collision avoidance
The Daimler team, led by head of “image understanding” Uwe Franke alongside Stefan Gehrig and Clemens Rabe, is developing an imaging system called “6D Vision”. The aim of this project is to create a system that is able to recognize road hazards faster than is possible with the human eye – with the ultimate goal of reducing car accidents. 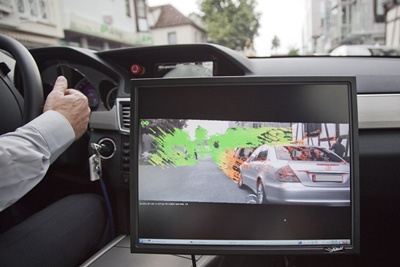 Imitating human vision, the 6D technology is based on a pair of cameras to produce a stereo image, alongside algorithms that imitate the human brain’s ability to assess the motion of objects and predict their future trajectory.

The problem with human vision is the speed with which it is able to process that information, as well as the relatively short distance over which human stereo perception works. According to Daimler, even an attentive human needs around half a second to assess a dangerous situation, such as a child running out into a road. The team says that the 6D system can react in just 0.2 seconds. And while human stereo vision is very effective at a range of up to 12 m, the new system extends that to 50 m and is also said to be much better than other technologies in poor visibility.

Daimler sees 6D Vision as offering the potential for a major step in driver assistance and towards what it calls “accident-free driving”, although whether insurance companies will agree with that remains to be seen.

TU Dresden team – organic LED and PV
The potential for low-cost generation of light and electrical energy through easy-to-produce organic materials is the basis of the second nomination – a team rooted in research at TU Dresden starting in 1985 that has since spawned a number of commercial spin-off companies.

Those spin-offs include the OLED specialist Novaled – recognized as a leader in the emerging field – and Heliatek, which until recently held the world record for organic solar cell efficiency. OLEDs are now commonplace in small-area displays such as smart phones, but organic lighting and PV technologies are yet to make a significant commercial breakthrough - although there is a huge amount of activity at the research level.

The team of Karl Leo, Martin Pfeiffer and Jan Biochwitz-Nimoth has been instrumental in the early development of organic electronics for lighting and energy applications, through work at both TU Dresden and the Fraunhofer Institute for Photonic Microsystems (IPMS), located in the same city.

Fraunhofer team ISE – CPV
The third team nominated is one of the pioneers of CPV technology – which is now starting to gain a commercial foothold. Alongside Amonix and SolFocus, Soitec’s solar subsidiary is recognized as one of the three leading companies in the emerging sector. 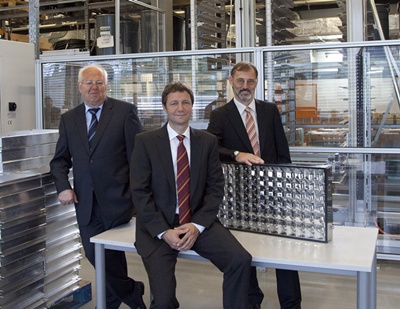 While crystalline silicon and thin-film CdTe cells dominate the current PV market, CPV is seen as a good solution in particularly sunny and hot locations. Soitec says that it has installed a total CPV generating capacity of more than 3 MW in various locations around southern Europe, the US and South Africa – where conditions are suited to the technology.

The company has also agreed some much larger installations for the San Diego region of southern California, with the potential for more than 300 MW of peak generating capacity – although a large proportion of that total is dependent on the award of loan guarantees from the US Department of Energy. Soitec is also planning to build a manufacturing facility with a CPV panel capacity of 200 MW in the San Diego region.

• Previous winners of the Deutscher Zukunftspreis with photonics technologies include a team from Osram Opto Semiconductors in 2007 (for inorganic LED development) and Stefan Hell in 2006 (for high-resolution microscopy).