Another record quarter on both the top and bottom lines for the fiber laser pioneer, as cutting applications take off. 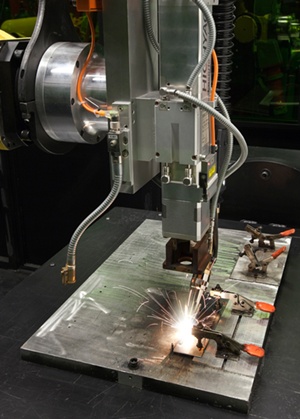 IPG Photonics, the company that is changing the face of laser materials processing with its high-power fiber laser products, has delivered another record-breaking quarter, with sales reaching a new high of $121.9 million – up 22% sequentially and 81% from last year’s second quarter.

That translated to a pre-tax profit of $45.3 million ($30.7 million income after tax), thanks to continued growth in demand for the products from around the world. While the company already holds a very large share of the market for lasers used in welding, cutting applications – typically seen as the domain of CO2 lasers because of the need for very high beam quality – are now growing fast.

IPG’s CFO Tim Mammen told investors that the company was aiming to ship more than 1000 high-power lasers for cutting this year, a level that would represent a market share of around 20-25%. And while previous estimates have suggested that fiber lasers might ultimately take only a 30% share of the cutting market, IPG now expects that the level of penetration will surpass 50% within a few years.

“In cutting, we dramatically increased our position, including establishing a substantial position in flat-bed cutting, and our share of sales into this application is growing rapidly,” Mammen said.

Cutting of very thick metals does remain a CO2 laser specialty at the moment, but a Japanese customer that has developed a new kind of cutting head with an IPG laser has now shown the ability to cut 32 mm-thick steel – seen as an important milestone for a fiber source, and one that may enable the technology to grow its market share.

Energy efficiency
While cutting represents a relatively new market for IPG, its customers in the automotive sector are now routinely ordering welding systems based on fiber lasers. In Japan, where there is a stronger focus on energy efficiency following recent events, the company is expecting orders for body-in-white welding applications in the coming quarter, while in Germany the equipment is already used to weld car seats and aluminum doors. In North America, it is a similar story:

“The US auto industry continues to invest in new models and new production techniques which are contributing to high-power laser sales,” Mammen said. Car industry trends such as the push for lighter vehicles and better fuel efficiency in the US should also benefit IPG, as laser welding is seen as key to achieving the high-integrity welds required.

Overall, IPG reckons that the market for lasers used in welding is worth around $250 million right now – and its own penetration of that market is around 50%. But as the demand for better welding and reduced energy costs grows, Mammen and CEO Valentin Gapontsev anticipate that the available market will rise to some $750 million, with fiber lasers taking at least a 70% share.

Aside from its laser sources, IPG is also developing a new laser “seam stepper” welding system for body-in-white applications. In the second quarter it received final qualification of the tool from its lead customer – a major European automaker. System orders will follow, while IPG will also now start to market the system around the world.

Macro-economic concerns
With orders remaining very robust in the second quarter, IPG is anticipating another strong quarter to follow, but Mammen and Gapontsev did strike a note of caution as far as any more predictions were concerned, saying that they were now feeling less “gung-ho” than at the start of the year. That is a result of the gloomy macro-economic climate extending from much of Europe to the US, as well as fiscal tightening in China – the major engine of growth for IPG.

Next month will also see IPG resume its long-running courtroom battle with rival IMRA, with the case scheduled to begin on September 26 and run into the closing quarter of the year. IPG has earmarked legal costs of $2 million for the case.

Nevertheless, IPG is continuing with its $50 million investment in additional manufacturing capacity, application laboratories and sales facilities this year as it seeks to keep pace with the escalating demand for its lasers. 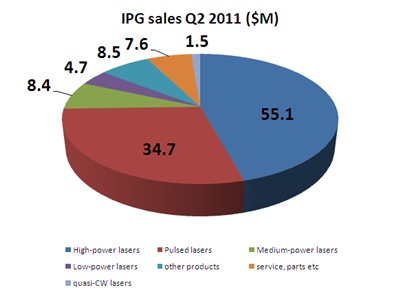 In the second quarter it purchased land in Russia that is earmarked for a new fiber laser facility, while it will also add further front-end laser diode capacity at its US fab in early 2012. Gapontsev illustrated the strides that IPG has made in terms of diode production by revealing a sharp increase in the total megawatts of optical power that its laser chips can deliver.

In 2010, said the CEO, annual production - measured in terms of optical output power - was just below 5 MW. But that will increase to 12 MW this year and, following the capacity investment early next year, 20 MW in 2012. The additional output power from each laser chip produced by IPG is significant, as it effectively reduces the cost and size of each resulting fiber laser. And that, in turn, enables IPG to keep potential competitors - who typically rely on merchant diode suppliers – at bay.

• While most of Wall Street took a nose-dive on August 2, shares in IPG Photonics jumped 5% in early trading to around $63.50, valuing the company at close to $3 billion.