The infrared optics and materials supplier would rather spend cash on growing its business than on a share repurchase program. 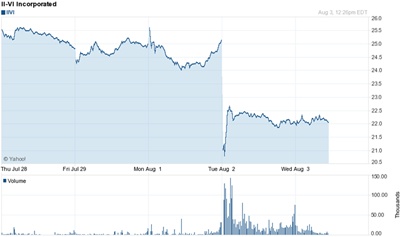 Shares in II-VI slid more than 10% after the infrared optics and materials company reported its full-year financial results – despite those results showing record bookings of $520.2 million for the year that ended June 30.

That represented a 34% year-on-year increase – thanks in large part to the addition of the Photop business acquired in January 2010. The company also posted a pre-tax profit of $101.7 million for fiscal year 2011, nearly double the $51.3 million figure reported for 2010. Since then II-VI has made further acquisitions, and with plenty of cash on its balance sheet company CEO Frank Kramer told investors that II-VI was still looking to expand:

“We would like to make some more acquisitions,” Kramer said, indicating that this would be a far more likely use of the company’s cash than any repurchase of shares.

II-VI completed its latest acquisition, of the telecommunications and fiber laser component maker Aegis Lightwave, just last month for $52 million in cash. That business is expected to bring in between $30 million and $35 million in fiscal 2012, building on the record revenues of $502 million posted by II-VI in the year just completed.

Kramer pointed to the currently very strong market for infrared optics as a key growth engine right now, largely a result of the strong global demand for industrial lasers. II-VI mostly benefits from sales of zinc selenide (ZnSe) optics used in CO2 laser systems. And although that sector is seeing increased competition from fiber lasers these days – especially in welding applications - the CEO says that sales of CO2 lasers have now returned to the historically high levels seen in 2008, before the onset of the credit crunch.

Strong replacement market
According to Kramer, CO2 lasers are now shipping at a run-rate of between 4500 and 5500 per year, indicating that the installed base of an estimated 55,000 systems are likely running at high utilization rates – meaning that the ZnSe optical components need to be replaced more regularly.

II-VI will also benefit from increased fiber laser shipments through its HIGHYAG Lasertechnologie business, which produces fiber-based beam delivery systems. “Fiber lasers are having a good run, and are doing a lot of welding work,” Kramer noted, adding that HIGHYAG was still selling far more beam delivery units designed for welding applications than for cutting applications.

The expected strength of the industrial laser sector over the coming months should help to off-set ongoing weakness in the telecom sector, which has impacted revenues at II-VI’s Photop subsidiary, and uncertainty over military spending in the US. II-VI also said that orders for infrared optics had remained strong in July, after the end of the last fiscal year. With the addition of the Aegis business, the company reiterated its guidance for fiscal 2012, during which it expects to post sales of between $595 million and $615 million.

But despite that confidence, on a weak day in general for the markets on August 2, II-VI’s stock value dropped sharply on the Nasdaq exchange immediately after the results were announced. A partial recovery saw the stock end the day down 10%, equivalent to a market capitalization of around $1.4 billion.