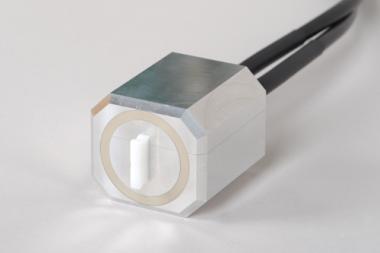 Medical imaging based on positron emission tomography (PET) has proven its value as a diagnostic tool. Based on the detection of gamma rays from short-lived radioactive tracers introduced into target tissues, it builds up three-dimensional images of the body's functional processes from the emission data.

During PET scanning, the level of radiotracer in the blood of the patient must be monitored alongside the tissue activity, to allow quantification and calibration of the PET images. This in turn requires a dedicated blood sampler.

But current blood samplers tend to be large and inconvenient to use, and their LYSO (cerium-doped lutetium yttrium orthosilicate) scintillation crystals are susceptible to electromagnetic interference. This is a big problem now that PET is often used in conjunction with NMR scanners for enhanced resolution.

A solution could be the Swisstrace Twilite system, developed jointly by researchers at the Swiss Center for Electronics and Microtechnology (CSEM) and Zurich-based nuclear medicine start-up Swisstrace.

"Twilite separates the sensing head and its scintillating crystals from the electronics and data processing systems," said Ross Stanley of CSEM. "It converts the tracer's output into an optical signal, and uses liquid light guides, rather than optical fibers or fiber bundles, to transfer it to a processor."

Flexible approach
Liquid light guides consist of a flexible outer sheath around a liquid core, a combination that brings not just efficient transmission in the blue fluorescence wavelengths of interest in this application, but also much greater physical flexibility.

"Optical fibers or fiber bundles would be too stiff and expensive for this purpose," commented Stanley. "Their stiffness can influence where the sensing head must be positioned during an experiment, so the flexibility of liquid light guides is a big advantage."

With the signal processing systems now located elsewhere, the Twilite sampler's measuring head was redesigned to be as small and discrete as possible. Smaller is definitely better when it comes to using PET to study laboratory animals such as mice and rats, which is a significant market sector for the technique.

"Using PET to monitor radioactivity in the blood of a rat usually involves placing a shunt from an artery to a vein, and measuring the radioactivity of the blood within it," said Stanley. "If you have a large instrument, this shunt is so long that the rat's heart cannot supply the blood to the sampler effectively. A smaller sampler able to be positioned beside the animal can be integrated into the experiment much more easily."

Twilite's developers also broke new ground by using tungsten as the shielding metal protecting the sampler's head from external radiation. Unlike conventional lead shielding, tungsten is compatible with NMR scanning, allowing the two imaging techniques to be used together. The drawback with tungsten is its high density, but the miniaturized design of the Twilite sampler head reduces the weight penalty to a minimum.

"Twilite's combination of new design features has not been tried before, and the system represents a very successful collaboration between the project partners," noted Stanley. "CSEM exists to facilitate technology transfer, particularly for Swiss industry, and has a long-term contract with the Swiss government to do so. Twilite is a relatively small project, but a good example of CSEM fulfilling that mission."