The largest concentrating photovoltaics (CPV) installation in the US has been connected to the grid. 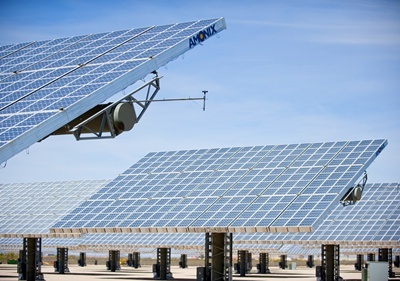 A new 5 MW concentrating photovoltaics (CPV) project recently completed by market-leading CPV system company Amonix is the largest yet built in the US.

Although not the largest CPV installation in the world - that remains a 7.8 MW system installed in Villafranca in southern Spain – the New Mexico facility is the largest to feature multi-junction III-V cells. The Villafranca installation, also based on Amonix systems, used silicon cells instead, but Amonix has switched to using the more efficient – and considerably more expensive - multi-junctions since then.

Amonix founder Vahan Garboushian showed details of the New Mexico installation during a plenary talk at SPIE’s Optics + Photonics show in San Diego, describing the 10 kW “megamodule” building blocks on which the systems are based.

According to a Greentech Media article, the project has been built and is being operated by NextEra Energy Resources, with the electricity generated sold to El Paso Electric.

The site is unlikely to be the largest CPV installation in the US for long, however. Amonix is already making progress on a 30 MW facility being developed in Alamosa, Colorado, under a Department of Energy (DOE) loan guarantee that has received a conditional commitment. Garboushian said in his presentation that this site was now under construction.

But the main thrust of the Amonix founder’s talk was the headroom for further improving CPV technology to reduce the cost of the electricity produced by the installations. Chief among those is the efficiency of the cells used, currently at 40% in production quantities from key supplier Spectrolab. Garboushian has counted some 17 companies now working on advances such as additional junctions and novel junction materials, and although he thinks that the devices will ultimately reach 48%, he also noted that new cell designs can be difficult to use and that making effective use of the additional efficiency will not be a trivial matter.

At the moment, the cells result in a module efficiency of about 31% for Amonix, which Garboushian expects to reach 33% by 2015. Other improvements should come from lenses with higher optical transmission, a maturing supply chain as CPV ramps towards a gigawatt-scale market, and better tracking accuracy. The use of micro-inverters could also deliver an overall power increase of some 5%, said the CTO.

With those kinds of refinements, Garboushian thinks that the levelized cost of electricity (LCOE) – the preferred metric of all CPV companies – could come down by approximately 20% by 2014.