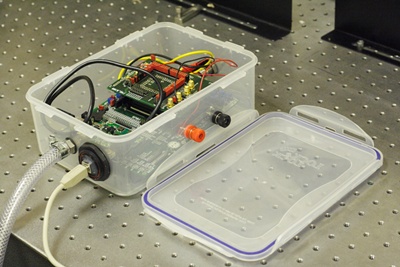 Three of Scotland’s leading universities have pooled their expertise in various fields of optoelectronics to create a compact explosives detector that could aid humanitarian mine-clearing efforts.

Although there are no immediate plans to commercialize the device, researchers at Edinburgh, Strathclyde and St Andrews universities are hoping to obtain a European grant to work with the Belgian Royal Military Academy and other collaborators to test their invention.

“We have combined desirable features of organic and inorganic semiconductors to make a new device that neither class of material could do on its own,” Ifor Samuel, from the Organic Semiconductor Centre at St Andrews University, told optics.org. “Ground penetrating radar is currently used for humanitarian 'de-mining', but does not give information about the composition of an object under the ground. The combination of our device with this would be very useful.”

A convenient coincidence
The detector relies on a simple interaction that occurs when conjugated polymers come in to contact with nitroaromatic-based explosive vapors such as DNB and TNT. Because those vapors are generally electronegative, when placed next to a light-emitting polymer, there is a photo-induced electron transfer to the explosive.

“The polymer absorbs light, leading to the formation of a singlet exciton which normally decays by fluorescence,” explained Samuel. “However, electron transfer to the explosive breaks the exciton, meaning it does not emit light. Essentially, the explosive quenches the light emission.”

This quenching can be detected in several ways, and has been the subject of past research at St Andrews. This new work is the first to use the change in the photoluminescence (PL) lifetime to reveal the presence of explosives. (AIP Advances 1 032115).

“PL lifetime measurements are usually more robust than steady-state intensity measurements, but typically need a lab full of equipment,” explained Samuel. “If factors such as the output power of the excitation source, the amount of power reaching the sample or the amount of power reaching the detector change, this would change the detected intensity, but not the lifetime, which is a key advantage.”

Real-time detection
The starting point of the team’s compact explosive detector is a CMOS-driven array of 64 AlInGaN microLEDs supplied by Strathclyde University and tailored to emit 1.2 ns pulses of light at 450 nm. A second CMOS chip contains a time-resolved analysis system, which includes an array of 64 single-photon avalanche diode detectors. Sandwiched between these two CMOS chips is a silica substrate coated with a thin film of a green light-emitting polymer. The entire system fits in a customised box measuring just 20 x 13 x 7 cm.

Another crucial aspect of the design is a rapid lifetime determination (RLD) algorithm. “Instead of measuring the entire decay curve of intensity versus time, we measure the decay over two equal time gates,” explained Samuel. “The ratio of these intensities can then be related to the lifetime. The RLD measurement takes approximately 15 seconds, allowing lifetime changes to be observed in near real-time.”

The team then compared the performance of its compact sensor with that of a conventional time-correlated single photon counting (TCSPC) system. Both instruments were exposed to approximately 10 ppb of DNB vapor for 15 minutes to assess the changes in PL lifetime, followed by 15 minutes of exposure to clean nitrogen to study the kinetics of PL lifetime recovery.

The compact system calculated the PL lifetime on-chip every 15 seconds for 15 minutes continuously using the 2-gate RLD method and produced results consistent with that of the TCSPC system.

“Our results show a sensing efficiency of approximately 40% with several thicknesses of films over a 15 minute exposure to 10 ppb DNB vapor,” conclude the authors in their paper. “PL emission also recovers completely with a nitrogen purge over the same time period. In near real-time, the required time-resolved lifetimes can be monitored with our compact, convenient and ultra-portable CMOS-based system.”

Attendees at SPIE’s Optics and Photonics event in San Diego, US, can hear Ifor Samuel discuss this work in greater detail. Samuel will be giving an invited talk as part of the "Organic Semiconductors in Sensors and Bioelectronics IV" conference on Thursday 25th August. His talk is entitled “Conjugated polymer laser sensors for explosive vapor detection” (reference 8118-13).

• This work is part of the UK’s EPSRC-funded Hypix project, which is aiming to develop hybrid organic/inorganic photonic circuits and devices and interface them with CMOS technology.