Lux Research says that solid growth in PV installations will be more than offset by price declines for the next five years. 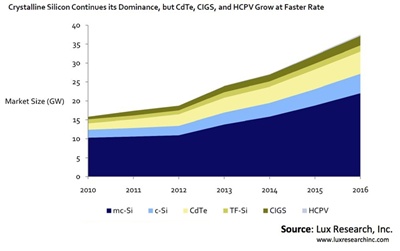 PV demand through 2016 by technology type

While demand for grid-connected PV will more than double between 2010 and 2016, the dollar value of the market will remain flat for the next five years.

That is one of the main findings in the latest report and forecast of the PV market by analysts at Lux Research. Matt Feinstein from Lux says that while demand measured in terms of system power will grow at a compound annual rate of 15.5%, vendors must brace themselves for a declining market size through 2016.

This year, the PV market slowed to a near-standstill in the first quarter because of subsidy changes and political uncertainty in the key European markets that currently make up the bulk of global demand. But in the same report, Feinstein suggests that such subsidies will not be needed before long, as the cost of the technology is pushed lower, while conventional electricity prices increase.

“An anticipated future increase in the cost of retail and wholesale power is all that’s necessary to generate positive demand – even in countries without subsidies,” writes the analyst, citing the example of Brazil – one of the fastest-growing economies in the world – as reaching this point by the end of 2016. As grid parity is reached in more locations, the dollar value of the market will then start to grow again from 2016.

Market diversification
By then, the PV market will have become much more geographically diverse. “Japan, China and India will emerge to drive significant volumes, and the US will come forth as a heavyweight, given the government’s support of tax equity through 2016 and a myriad of state-level programs,” states the Lux report.

Feinstein’s predictions for the market also suggest that commercial crystalline silicon PV systems will generate unsubsidized internal rates of return (IRRs) in excess of 10% in 55 geographies by 2016 – even though only a few will have reached the state of grid-parity.

Commercial rooftop PV is expected to become directly competitive with conventional electricity soonest, while Hawaii will this year become the first market to accomplish residential grid parity. By 2016, Hawaii will be joined by the larger markets of Italy, Denmark and Ukraine, forecasts the report.

Over that period, crystalline silicon solar cells will maintain their overall dominance, growing from around 13 GW of shipments next year to just over 25 GW in 2016. But other forms of PV will grow at a faster rate. CdTe is forecast to account for close to 6 GW by 2016, with CIGS pushing 2.5 GW.

For high-concentration PV (HCPV), Feinstein is expecting this nascent market to grow by more than an order of magnitude, from 31 MW in 2012 to 355 MW in 2016 – a figure that would mean HCPV represented around 1% of the total PV market by that time.

Not everybody agrees with that figure for HCPV, however. Vahan Garboushian, founder of the technology’s leading exponent in Amonix, told optics.org recently that he expected some 60 MW of HCPV installations this year, with Amonix itself accounting for 80% of that total.

Meanwhile another market research company, Strategy Analytics, has predicted 50 MW of HCPV installations in 2011, while by 2016 it is expecting demand to have broken through the 1 GW barrier – a prediction echoed by analysts at Greentech Media.

The Lux Research report "Market Size Update 2011: Putting the Rest of the World on the Map of Global Solar Demand" is available now via the company's web site.