The restructuring program already underway is being accelerated, with profitability next year the goal. 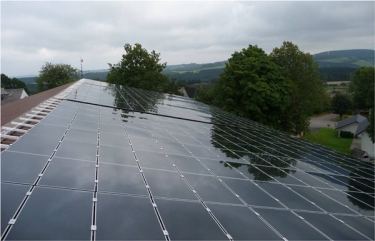 After an extremely weak first quarter of 2011, Q-Cells enjoyed significantly increased income in the second quarter. Improved business for its photovoltaic systems lifted sales revenues to €316 million, considerably better than the €125.1 million posted in the previous quarter.

But the company could not avoid an operating loss of €307.7 million for the quarter, and now expects that the full-year figures will show a loss "in the three-digit million-Euro range," according to CEO Nedim Cen, on predicted revenues of approximately €1 billion. Profitability is expected to return in 2012.

The price drops experienced across the sector were part of Q-Cells problems, but Cen indicated that a set of special factors were equally significant. Among them, impairment charges on property, plant and equipment at its German production sites amounted to €139.7 million, and a variety of one-off expenses came to €256.5 million in the second quarter.

The net result was an operating loss after interest and taxes of €354.8 million for the quarter, and a total loss for the first half of 2011 of €395.8 million.

Resharpened and restructured
Q-Cells had already announced a restructuring program at the end of 2010, but in light of current developments that program has been modified and in Cen's words "resharpened", into a package of measures aimed at improving the situation through lower production and administration costs.

"In the first half of the year, the difficult situation in the European market hit us particularly hard," said the CEO. "I expect competition to remain tough in the coming year with no significant changes to demand, but we will be in a much better position to deal with it. I am convinced that the strategy of further developing Q-cells into a photovoltaic solutions provider is the right way to go."

That process will see Q-Cells focus production on high-performance systems, particularly at the company’s Malaysian site which will run at full capacity in the second half of the year. Production capacity for solar cells at the company headquarters in Bitterfeld-Wolfen, Germany, will be permanently reduced to 50 percent.

Manufacture of crystalline Q.PEAK modules is being ramped up at Bitterfeld-Wolfen, while Q.SMART thin-film modules based on CIGS technology are being produced at full capacity again at the company’s Solibro subsidiary. Q-Cells is aiming for a total production capacity of between 1 and 1.2 GW for 2012.

Further management changes are also underway, with Andreas von Zitzewitz joining Q-Cells from Conergy and assuming the position of COO with immediate effect. Sales and marketing chief Hans-Gerd Füchtenkort has left the company, with Cen stepping in to the post for now.

Cen believes that demand, after coming to a complete standstill in the first quarter, can now rebuild. “We are convinced that the medium-term prospects of the solar industry are positive," he said. "Together with our customers and partners, we wish to be part of this development."