Organic LED lighting: only a niche market by 2020?

Analysts at Lux Research predict that organic LED lighting fixtures will remain far too expensive for mainstream use. 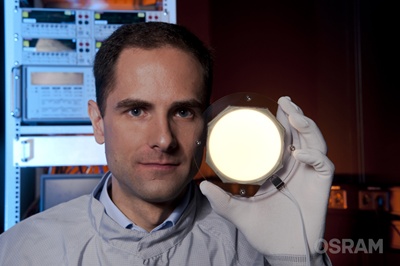 The future market for lamps based on organic LEDs is set to be a very small one, according to a new market analyst report. Lux Research says that although the aesthetically pleasing technology will improve over the next decade, and become much cheaper than today, it will still be far too expensive for mainstream use.

As a result, says Lux, OLED lighting will command just a $58 million market by 2020, with the technology only making a significant penetration into high-end applications such as designer lighting, casinos and upmarket bars and restaurants. If correct, it will mean that the wider market for OLEDs will be almost totally dominated by display applications such as phone handsets and televisions.

“The problem is that OLED lighting is so much more expensive than incumbent and emerging alternatives,” said the report’s lead author, Jonathan Melnick. “It’s only the most cost-insensitive markets that would use it for aesthetic value for the foreseeable future.”

DOE targets
In its latest multi-year program plan (MYPP), updated in May 2011, the US Department of Energy (DOE) estimates the current cost of an OLED panel at around $2560 per kilolumen – although that figure is difficult to ascertain accurately because the technology is at such an early stage in its evolution. Lux suggests an even higher figure, $18 per lumen, for a full lighting product.

One kilolumen represents approximately the output produced by a conventional 60 W incandescent bulb – at a typical cost of less than a dollar. Standard compact fluorescent equivalents consuming 13 W cost only $2, while dimmable versions are more expensive at $10 and a similar lamp based on inorganic LEDs now costs around $40. But that price is falling fast as LED package and luminaire efficacies continue to improve.

To be competitive with those technologies, the DOE has set a target for OLED panels of reaching $10 per kilolumen by 2020. But Melnick predicts that the cost of lighting products will drop by far less than that targeted amount, to around $180 per kilolumen on flexible substrates by the end of the decade. Despite this marked improvement, the technology will still be clearly much more expensive than other types of illumination, he reckons.

High-end applications only
Melnick expects commercial flexible panels to emerge by 2015 and find suitably high-end applications in hotels and bars that can absorb the very high prices of the fixtures. “All told, the designer lighting market for OLEDs will reach $32 million in 2020,” predicts the analyst. That would represent a tiny proportion of not just the overall lighting market – expected by Philips to be worth at least $100 billion by then – but also that commanded by conventional LEDs, which may well feature in the majority of general lighting applications at that point.

Lux also sees a small market for OLED luminaires, predicting applications worth only $22 million by 2020 as OLED-based lamps remaining priced at thousands of dollars will prove prohibitive for most customers.

Last year Universal Display Corporation (UDC), one of the key developers of light-emitting organic materials, said that in collaboration with lighting company Armstrong World Industries it had developed an OLED ceiling lamp with a white-light panel efficacy of 58 lm/W. That compares well with early commercial OLED products such as Osram’s ORBEOS, although the DOE’s MYPP identifies a number of technology challenges with OLEDs that still need to be overcome – aside from the cost issue.

optics.org invited UDC, which raised $250 million in a stock offering earlier this year, to respond to the forecast numbers provided by Lux Research, but the company was unavailable for comment prior to publication.

Lux is similarly pessimistic about the potential for another organic technology - this time organic photovoltaics - as its research director Mike Holman told optics.org in April this year. Without a game-changing improvement to OPV conversion efficiencies, the analyst said that it will remain too expensive for widespread deployment and only find use in niche applications such as defense.