Amid a pause in orders for conventional lithography equipment, Cymer will double staff numbers working on EUV sources by year-end. 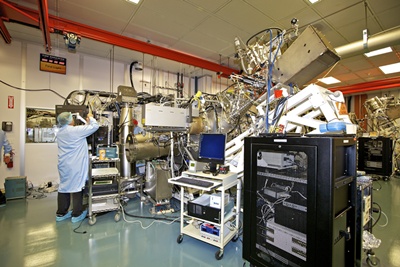 by Jacqueline Hewett
The multi-faceted nature of Cymer’s business was on display as senior managers at the light source maker faced up to investors to discuss the company’s second quarter financial results.

News that orders for deep-UV light sources were down in the second quarter as chip makers ponder their capital investments for 2012 failed to cast a shadow on events. Company CEO Bob Akins was quick to turn the attention to news that Cymer had completed the installation of its second extreme UV 3100 source at an additional chipmaker location and recognized partial revenue from the installation of a second TCZ Gen4 crystallisation system.

“Customer pull for EUV and TCZ products is a significant driver of future growth for the company,” said Akins. “We expect to ship a significantly reduced number of DUV light sources in the third quarter. In spite of slowing DUV demand, we are committed to EUV source development and commercialization as we believe that our LPP [laser-produced plasma] EUV source technology is the most viable path towards enabling the extension of Moore's law.”

Having made this statement about DUV, Akins added that Cymer had the inventory and operational efficiency to respond to market swings in both directions, should the demand situation change during Q3.

All about EUV
Although Akins and fellow members of Cymer’s senior management discuss EUV progress on a quarter-by-quarter basis, a significant amount of time was dedicated to the topic as the team was keen to highlight the increased levels of investment.

Akins told investors that, to date, Cymer has successfully built eight EUV 3100 sources. Two are operational at chipmaker sites; a third and fourth are in the process of installation at other manufacturer locations; and an additional source is planned for installation by a chipmaker this year.

“Our rate of EUV source development is accelerating as a result of our increased investment and resourcing,” he said. “We plan to double our EUV staffing by year-end and we are on track to execute this goal. We are having very good success hiring good quality people who are excited to develop EUV technology. It is clearly the most exciting technology development effort in the semiconductor capital equipment area right now. We are also investing in expanding manufacturing capacity to fulfil EUV 3300 source demand.”

The timescales by which Cymer hopes to meet the EUV power milestones of 100W (60 wafers per hour) and 250W were also discussed. “By the end of [this] year, we hope to demonstrate 40 – 60 wafers per hour here in Cymer,” said Akins. “We’ll then make that more robust and are targeting deployment of 100W technology in the field by the end of Q1 2012. That technology will then transfer to the 3300 source and I would anticipate that in 2012 we will have upgrades towards the ultimate 250W level.”

And if all those positive statements were not enough, Akins’ final word on the matter left investors under no illusions as to the importance of EUV to Cymer’s product portfolio. “EUV is a very demanding technology and the company that takes the lead at the beginning is in a strong position to make a sustained profit,” he said. “We recognize that technology leadership is key in this area and that is why we are spending and ramping as we are in EUV technology.”

Q3 outlook
The final area to keep an eye on is TCZ - a fully owned Cymer company developing laser crystallization production equipment for the flat-panel display market - which now seems to be ticking along nicely.

In June, Cymer received customer acceptance and recognized partial revenue of around $3million from its second TCZ Gen4 crystallization system. This product was installed at a large Asian display manufacturer and will be used to produce handheld OLED displays. Cymer also hopes to ship its first TCZ Gen 5.5 system to another leading display maker in Q3 2011 and record revenue in early 2012.

Paul Bowman, Cymer’s CFO, rounded off by providing the guidance that revenue for Q3 would be approximately $130 million, some 18% lower than Q2. A point worth noting is that this figure does not assume any EUV 3100 source revenue. “We intend to recognize revenue when we have fully satisfied the terms of our agreement with ASML,” said Bowman. “ASML is essentially the customer, and the approver of the agreement.”