Company working on quantum-dot inks to improve PV module performance had raised more than $53M in equity funding over the past five years. 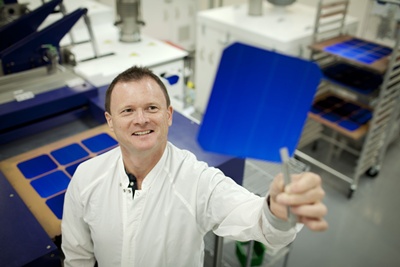 The global materials company DuPont has acquired the Silicon Valley start-up Innovalight for an undisclosed sum, as it bids to double its sales into the photovoltaics market over the next three years.

Innovalight, which is headed up by former venture capitalist and Bookham (now Oclaro) senior VP Conrad Burke, is developing inks and process technologies that improve the efficiency of crystalline silicon solar cells. Back in January 2006, Burke described the company’s technology to optics.org, saying that it had worked out how to produce silicon quantum dots in volume using a solution process.

“You can tune the photovoltaic to capture parts of the spectrum that have not efficiently been captured before with traditional methods - the red and the infrared for example,” he explained at the time, adding that the process could make silicon quantum dots in uniform sizes from 2 to 10 nm in diameter. Controlling these sizes means that key optical properties of the dots, such as their absorption spectra, can be tailored for specific applications.

Venture rounds
Founded in 2001 on the basis of technology initially developed at the University of Texas at Austin for a variety of uses, by early 2006 Innovalight had been through only a series A round of venture funding, but its subsequent focus on PV applications changed that. It raised $7.5 million in May 2006, $28 million in October 2007 and then $18 million (of a targeted $20 million) in early 2010.

According to its development roadmap, Innovalight believes that it will ultimately be able to raise crystalline silicon cell conversion efficiencies to more than 20%. While some companies and institutions have been able to produce cells with close to that level of performance in the laboratory, most production cells manufactured in volume today have a significantly lower efficiency.

Innovalight has previously said that it would ramp its ink manufacture to a level that could support production of 2 GW worth of enhanced monocrystalline silicon cells by June 2011 – equivalent to around 10% of the entire PV cell market currently. The company is developing another ink for multi-crystalline silicon cells, where it believes that conversion efficiencies can be boosted by 1.5%.

DuPont, which already exceeds $1 billion in revenues from sales of materials such as encapsulants and backsheet films into the PV sector, has set a goal to double that total by 2014 and sees this deal as one way to help it achieve that target. Innovalight’s silicon inks are already used in conjunction with DuPont’s Solamet PV metallization pastes, which are said to increase electricity production from cells by enabling better performance of selective-emitter solar cells.

David Miller, president of the company’s electronics and communications division, said of the acquisition: “Innovalight has very exciting technology that improves cell efficiency and DuPont can help expedite its adoption.”