While its government systems business is hampered by purchasing bureaucracy in the US military, FLIR makes an acquisition. 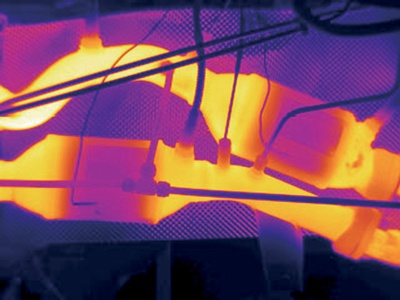 Thermal imaging equipment vendor FLIR Systems has adjusted its sales expectations for fiscal year downwards by $100 million, as a result of US defense budget push-outs and a growing bureaucracy that is impacting procurement decisions.

Although the company, which is headquartered in Portland, Oregon, reported another strong quarter in terms of its overall sales – total revenues jumped 18% compared with the same period in 2010, to $390 million – orders in its government systems division weakened noticeably, dragging its backlog down by some $41 million.

FLIR's net income for the quarter was also down, at $29.3 million compared with $59.5 million a year ago - although that was largely due to a $39 million out-of-court settlement to end litigation arising from its acquisition of Indigo Systems back in 2004.

With the gloomy outlook for US military spending in general, and order push-outs expected to continue while politicians remain stuck at an impasse over future spending, FLIR is now forecasting full-year revenues of between $1.6 billion and $1.65 billion – down from its prior expectations of $1.7-1.75 billion.

A subdued-sounding Earl Lewis, FLIR’s CEO, bluntly told investors that the quarter was not up to his earlier expectations, and described how the decision-making process within the US military was impacting the company:

“There’s a lot more levels of scrutiny on procurement officers [now],” he stated, explaining that some spending decisions that would previously had been made by those officers were now being referred far higher up the chain of command – meaning that in some circumstances even colonels were needed to sign off purchses.

Inevitably, that is causing delays and, for FLIR, a substantial gap in terms of orders – although the CEO confirmed that no orders had actually been cancelled yet. But with the lower spending and growth rate that they now expect from the US military, Lewis and his senior managers said that they would need to adjust expectations and re-organize the company appropriately.

Surveillance impact
While government systems revenue actually increased by 4% from a year ago in the second quarter, to $174.9 million, the real impact of the US procurement problems is evident in its sales of surveillance equipment, which decreased by 16% year-on-year to $141.5 million.

Meanwhile, revenue from the company’s commercial systems business jumped 32% to reach $215 million, of which the thermal vision and measurement segment accounted for $164.8 million. FLIR said that it shipped its highest-ever number of thermography cameras during the latest quarter.

The photonic component and system maker Aerius Photonics will now become part of the commercial systems business, after FLIR acquired the Californian company for $27 million in cash. Based near Santa Barbara, the historical breeding ground of so much US infrared detector expertise, Aerius specializes in InGaAs focal plane arrays for short-wave infrared (SWIR) applications, and also produces VCSEL devices used for active illumination.

FLIR said that it had been working with Aerius for some time, and the acquisition should help to beef up its offerings in multi-spectral imaging applications, as well as laser rangefinders.

Amid the delays in procurement of its surveillance products, FLIR did also highlight some recent successes of other photonic technologies within the defense and security area. One of those is the development of a robot-based Raman system for detection of hazardous chemicals, which has now been deployed by the Department of Defense.

And on the commercial side, FLIR has high hopes for a new hand-held thermal imaging product called “Scout PS”. The compact, lightweight imager is priced at only $1999, with the company believing that it can tap into a completely new market for personal use of thermal imagers by hikers, campers and "outdoorsmen of all kinds".