Surgeons at the Texas Children's Hospital have performed the revolutionary technique on five patients – all are now said to be seizure-free. 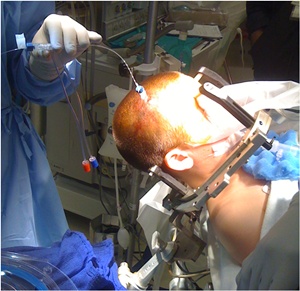 A combination of stereotactic laser surgery and state-of-the-art magnetic resonance thermal imaging techniques is being used for the first time to treat epilepsy in high-risk patients.

Angus Wilfong and Daniel Curry from the Texas Children’s Hospital are believed to be the first physicians in the world to use the approach on patients with deep brain lesions that can currently only be treated using a highly invasive craniotomy procedure. They believe that their initial success on five young patients will eventually have a huge impact on treatment of the condition, and that the laser procedure will become widely used in the future.

“We believe the use of MRI-guided laser surgery will change the face of epilepsy treatment, and provide a life-changing option for many epilepsy surgery candidates – both children and adults,” said Wilfong, director of Texas Children’s comprehensive epilepsy program and also a professor of pediatrics and neurological surgery at the Baylor College of Medicine.

Around one in every hundred people are believed to suffer from epilepsy in some form, although the severity of the condition is highly variable. Many patients can be treated effectively with drugs, but for those that cannot cranial surgery is often used to directly treat the brain lesions that cause the condition. But for those patients with deep lesions, particularly those close to parts of the brain that control vision or other critical functions, this is a high-risk option.

As well as being much less invasive than craniotomy, Wilfong and Curry say that the guided laser ablation technique reduces the risk of complications due to contact with surrounding brain tissues. The laser probe is inserted into the brain through a hole in the skull only 3.2 mm in diameter. As a result, recovery time is much shorter, with the five patients treated so far mostly released within five days. 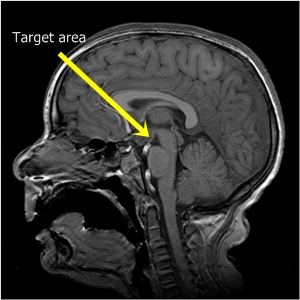 980nm laser ablation system
The optical system is based on a continuous-wave 980 nm diode laser, delivered through a fiber-optic with a 1 cm diffusing tip. The fiber is housed within a coaxial cooling catheter circulating room-temperature saline to cool the applicator, with the whole procedure taking place within a conventional 1.5 Tesla MRI scanner to provide real-time thermal imaging.

“The main use of the MRI guidance is to actually be able to observe the target lesion before the ablation is made, and the position of the laser catheter tip can be exactly imaged by heating up it up by just a couple of degrees,” the Texas team told optics.org. “This confirms the position [of the catheter tip] before continuing on with the ablation. We can also place safety markers on the MRI image to protect sensitive structures from reaching a pre-defined temperature to avoid damage.”

Wilfong says that the risks associated with the laser procedure are small – certainly in comparison to a conventional craniotomy. “Obviously a stereotactic tract is made by the laser catheter to reach the target. The risks associated with this are small, but not zero – mostly related to bleeding,” he said, adding that he expects the new approach to become widely used in future epilepsy treatment. “[The technique] just really needs confirmation by other academic epilepsy centers to reproduce our successes,” he told optics.org.

The pediatric neurologist says that he and Curry realized that the laser procedure could be used in epilepsy treatment after first noticing the success of a similar approach for treating brain tumors.

As well as continuing follow-up of the first patients, the surgical team now intends to publish a “proof-of-concept” academic paper in the fall on the treatment of the initial five subjects.

Case study: Keagan Dysart
One of the first five patients treated with the MRI-guided laser procedure is Keagan Dysart. The nine-year-old from Converse, Texas, was diagnosed with a hypothalamic hamartoma. Though benign, this type of tumor is often intertwined with the hypothalamus, which regulates critical functions such as maintaining body temperature, blood pressure and electrolyte balance. The hypothalamus also sits very close to the brain stem and optic nerve.

The condition resulted in so-called gelastic seizures, causing regular uncontrollable giggling, as well as the more recognizable epileptic symptom of a tonic seizure, causing body stiffening. Because of the size and position of the hamartoma, Keagan’s case would have been particularly high-risk with a conventional craniotomy, with the potential to damage the vision system, pituitary gland, or cause diabetes insipidus, a potentially fatal condition that stops the ability of the kidneys to conserve water, and which is caused by damage to the part of the brain that releases an anti-diuretic hormone.

The complexity of Keagan’s case made him an ideal candidate for the new laser procedure, which the team says was successfully performed in March – with no complications. Like the other four patients treated so far, he is now seizure-free. “The decision to go forward with this surgery was the toughest decision and the best decision we ever made,” said Khris Dysart, Keagan’s father.