The Nobel laureate is on a five-day trip to discuss potential US-Russian collaboration in renewable energy, efficient lighting and nuclear power. 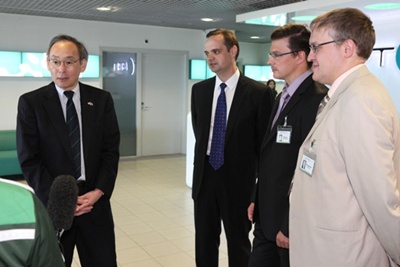 Steven Chu, the US Energy Secretary, has visited the LED manufacturer Optogan as part of a diplomatic trip to Russia to discuss future collaborations in the energy sector.

The 1997 winner of the Nobel prize for physics arrived at Optogan’s manufacturing facility in St Petersburg on June 6, ahead of scheduled visits to Moscow to discuss smart grid technology and nuclear power, and a meeting with officials from Rusnano, the government-owned sponsor of high-tech developments in the Russian Federation.

Rusnano has been central to the establishment of Optogan as the only significant LED maker in Eastern Europe, and is one of the company’s major investors. Optogan formally opened its 15000 m2 gallium nitride fab in November 2010, following a 3.35 billion ruble (€80 million) investment. Rusnano is also a significant shareholder in IRE-Polus, the Russian subsidiary of fiber laser developer IPG Photonics.

"From clean energy to nuclear security, the US and Russia have a growing number of opportunities for partnerships that can benefit both countries and the world," said Chu ahead of the trip. "I'm looking forward to a constructive and productive dialogue on ways we can seize these opportunities and work closely together to achieve our shared goals."

Capacity ramp
According to Optogan, Chu and his delegation heard about plans that the company has to expand chip production at the St Petersburg fab. Last year, Optogan CEO Maxim Odnoblyudov said that capacity would be ramped towards the end of 2011, while the company also has plans to introduce products outside of its domestic market.

According to a statement issued by Optogan, Odnoblyudov said that the exchange of information regards leading technologies and global co-operation was essential to making major changes to energy systems on a national and international scale.

“The fact that we have the opportunity to work hand in hand with the leading scientists of energy-efficient technologies is a success for Russia and for our company,” he added. “For Optogan this implies that our company is a prime example for international collaboration to transfer the scientific achievements to society.” 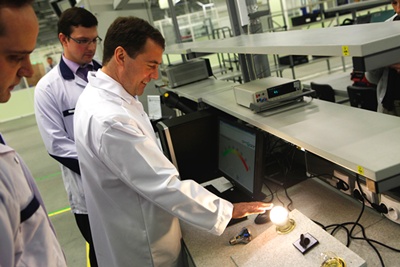 Switched on to SSL: Dmitry Medvedev

The same statement quoted Chu as saying: “Solid-state lighting is the energy-efficient solution of the future, with a convincing global potential. I strongly believe that Optogan has a great opportunity for joint projects and co-operation with American business partners.”

Chu is the latest in a stream of high-profile visitors to the Optogan fab. Following Russian Deputy Prime Minister Sergey Ivanov’s official opening of the facility last year, President Dmitry Medvedev arrived for a tour in March. A month later, the company received a delegation from the Bavarian Ministry of Economic Affairs.

Although now firmly in the hands of Rusnano and private equity investor ONEXIM, Optogan actually started out life in Finland, where it was founded by Odnoblyudov along with Vladislav Bougrov and Alexey Kovsh back in 2004.