The German government's new funding package for photonics resonates through the event, as we see the 'tip of the iceberg' for ultrafast lasers in industrial applications. 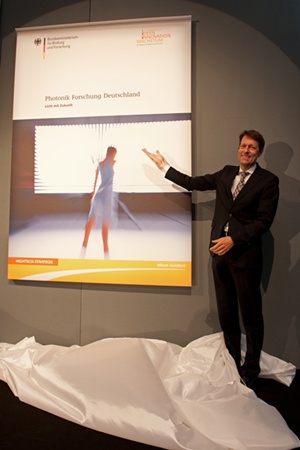 BMBF announcement: music to the ears

Rarely can a trade show have kicked off on such a positive note. The German government’s announcement of a major tranche of funding through at least the middle of the decade set the tone for a feel-good 20th LASER World of Photonics in Munich, adding to a buzz that has been building for the past year.

The Federal Ministry of Education and Research (BMBF) unveiled its €100 million-per-year support for photonics research and development, with funding set to be matched by commercial partners, on the opening day of the event. That funding, which aims to create 20,000 new jobs by 2015, is expected to continue through 2020 - although the BMBF has only specified figures up until 2015 so far. Coupled with the European Commission’s selection of photonics as one of its five “key enabling technologies”, these look increasingly like heady days for the sector in Europe.

Inevitably at LASER, the focus on industrial production technology and the power of the local German manufacturing base tends to dominate the feel of the event – meaning that the 3000+ conference delegates and presence of pioneers in other fields such as biophotonics and metrology can often go un-noticed. As per usual, it was the rival industrial systems giants Trumpf and Rofin-Sinar who competed for sheer square-footage of exhibition space and bragging rights.

Committed customers
Trumpf chose to reveal its deal for 50 laser cutting systems with the car maker VW at the show. Making the announcement, the company’s triumphant laser technology chief Peter Leibinger was unperturbed by a colleague’s crashing tumble down the stairs of Trumpf’s giant two-storey booth as his speech reached a climax. After the show, Klaus Löffler, international sales director for Trumpf’s laser systems business, summed up the mood change from two years ago, saying: “Compared to LASER 2009, customers this year were much more ready to commit to investments – in part thanks to their bulging order books.”

That VW deal may have stolen some thunder from Rofin’s own raft of announcements, which were largely centered on fiber laser technology. But one area where Rofin does seem to hold the edge on its rival is in the ultrafast lane. At LASER 2011, Rofin was showing off its StarFemto system for the first time. The tool is powered by a fiber-based, 1552 nm, 800 femtosecond source provided by Raydiance, after the two companies entered into a technology alliance last summer.

Ultrafast lasers – in the form of picosecond systems – have been steadily establishing themselves on the industrial scene over the past couple of years, but the StarFemto goes an extra step into the realm of “cold ablation”. At less than a couple of picoseconds, pulse durations approach the scale of the electron-phonon coupling time, meaning that virtually no heat is transferred to the material being ablated.

The Rofin system has so far been adopted by a Swiss watch maker to make ultra-high-precision parts, while Raydiance says that it has now shipped around 100 sources, and is gearing up for a ramp in demand for customers requiring multiple tools in a production-line environment.

The fiber approach is not universal, however, and in Munich Jenoptik officially launched its JenLab D2.fs product, a thin-disk laser that pushes the ultrafast regime even further – yielding a 400 fs source that it says is sufficiently stable and reliable for industrial use.

Also exhibiting in Munich for the first time was Amphos, a spin-out from the Fraunhofer Institute for Laser Technology (ILT) that specializes in kilowatt-power femtosecond laser sources based on its diode-pumped "Innoslab" amplifier design. Last year, the ILT/Amphos team demonstrated that two cascaded amplifiers could deliver 1.1 kW average power via 615 fs pulses, although this technology is not yet a fully industrialized concept. 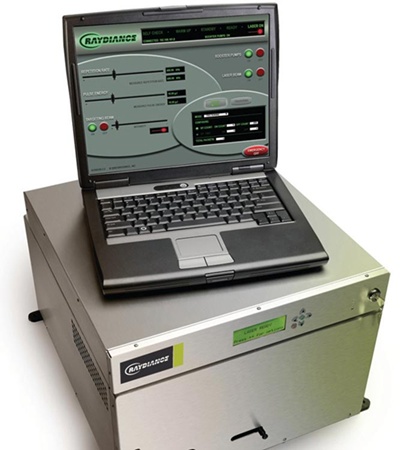 Tip of the iceberg
Femtosecond may represent the industrial ultrafast choice of the future, but also making its presence felt in Munich was Lumera Laser, the developer of picosecond laser sources for similarly high-precision manufacturing applications. Only ten years ago, Lumera had just been formed by four PhDs out of Kaiserslautern.

Now with more than 500 lasers deployed in the field and around 100 employees, marketing director Bernhard Klimt says that the company has effectively industrialized cold ablation. Klimt also believes that some of the advantages of the femtosecond regime are overstated, and that the 10-15 ps pulses delivered by Lumera’s solid-state sources are short enough for virtually any ultrafast application, although the gain in peak power from a femtosecond pulse would be useful in micro-drilling.

More important, on top of reliability, from an industrial point of view is the pulse repetition rate – which translates directly to throughput - and Lumera has focused on its 'pulse-burst' approach to rapid machining.

Speaking at the 10th International Laser Marketplace event, held alongside the LASER show, Lumera’s CEO Achim Nebel reiterated that view, adding that femtosecond lasers were yet to achieve the same level of robustness and reliability of Lumera’s lasers – although no doubt Raydiance and Rofin would dispute that. Either way, Nebel stressed that ultrafast is still very much at the introductory stage, finding early applications in semiconductor, flat-panel display and PV manufacturing. “It’s the tip of the iceberg,” he said, “and we are adding to the [laser] market, not substituting other lasers.”

Anaesthetic-free dentistry?
If the tip of the iceberg represents ultra-precision micromachining, Nebel sees glass cutting and medicine as two potentially major applications still lurking beneath the surface. One of the key advantages of all ultrafast lasers is that they can machine virtually any material – regardless of wavelength. Typically, glass presents a problem – not just because of its transparency to traditional laser wavelengths. At any thinner than 300 µm, glass also presents problems for standard diamond tools, and as a result Nebel sees cutting of thin glass as a “huge” future market for picosecond lasers.

An intriguing possibility also exists in dentistry. The idea of using lasers to replace the dentist’s drill is nothing new in itself, but Nebel believes that a picosecond source would not just get rid of the unpleasant vibration and noise – it would also offer pain-free procedures without the need for an anaesthetic.

That would make a pleasant change from not just the standard diamond drills used to remove tissue, but also the Er:YAG lasers that cause heating and sometimes generate unpredictable micro-explosions. Picosecond laser dentistry is not available yet, but if a German project (“MiLadi”) co-ordinated by the University of Bonn is successful, ultrafast lasers may end up being used for all kinds of pain-free dental applications.

Arguments over the relative merits of ultrafast and ultrafast (i.e. picosecond versus femtosecond regimes) will inevitably go on, but with many companies having developed such sources, it is clear that these, along with fiber lasers, are on course for significant penetration of the industrial laser market by the time the next LASER show comes around in 2013.

Mike Hatcher is the editor of Optics.org