Support for domestic-scale PV remains unchanged but feed-in tariffs for installations greater than 50kW will be cut. 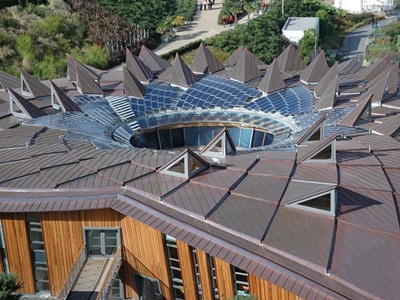 The UK government has confirmed that it will make substantial cuts to feed-in tariff support of large-scale solar photovoltaic installations and so-called solar farms, following a fast-track review of its “green electricity scheme” initiated in February.

Although small-scale domestic (less than 50 kW) PV will continue to receive the initial tariff support of 41.3 p per kilowatt hour of energy generated, subsidies for installations any larger than 50 kW will be cut drastically.

Greg Barker, the Minister of State for Energy and Climate Change, told Parliament that the change was necessary to stop the funding made available through the tariff being quickly drained by large-scale installations, rather than reaching the wider intended target of domestic installations:

“It is clear that the demand for feed-in tariff subsidy has grown so substantially that it now significantly exceeds the amount of funding available during this [2011-2015] spending review period,” Barker said. “Without urgent intervention, the scheme would have been completely overwhelmed within a very short period of time.”

As a result, support for PV schemes with a peak output above 50 kW have been cut on a sliding scale, with support for very large-scale installations effectively made uneconomic. No retrospective action will be taken, but from August 1 onwards, installations in the largest band – between 250 kW and 5 MW – will receive only 8.5 p/kWh. In the original tariff scheme that was launched just over a year ago, any installations above 100 kW in scale would have received 29.3 p/kWh.

Unanticipated popularity
According to the review of PV projects, the number of large-scale installations planned had been much higher than originally expected – although that was not surprising, given the generous level of tariff support initially made available.

“Every 5 MW large scale solar scheme would incur a cost of approximately £1.3 million per year, which means that 20 such schemes would incur an annual cost of around £26 million - money that could support PV installations for over 25,000 households,” said the Department of Energy and Climate Change (DECC) in its statement on the tariff review.

Barker added: “Under the current tariffs, large scale solar PV projects are securing much higher returns on investment than the scheme intended. This is reflected in the unanticipated number of such projects now in the pipeline.”

The changes show how the UK government views PV primarily as a microgenerating source, rather than as a utility-scale element of the energy mix. That follows the approach pioneered in Germany – albeit on a much smaller scale – and is in contrast to other countries such as Spain and the US, where the much higher solar resource makes utility-scale PV farms more cost-effective.

The decision is likely to see those companies that had been developing large-scale solar farms in the UK either scrap their plans or attempt to rush them through in advance of the August 1 deadline. According to the DECC’s summary of responses to the fast-track review, many respondents involved in larger-scale projects had wanted a “transitional period” to allow for those projects to qualify for the original tariff, regardless of the project completion date – but the government decided against allowing any such period.

The same document says that 57% of the 466 responses received were against cutting the tariff for large-scale PV, while 40% agreed with the proposal. The most common argument cited by those against the changes was that the tariff scheme should not be affected by government spending cuts, because its cost is met through consumers’ electricity bills – and not through direct government taxation.

Last year, the government said that it would reduce the total feed-in tariff support scheme by 10% from its original £400 million cumulative total by 2014-2015 – as part of widespread UK spending cuts to be applied across all government departments.

Other key reasons to oppose the changes were the impact that they would have on investor confidence in renewable energy sources - a worry acknowledged by the DECC but viewed as less important than fiscal responsibility - and the argument that solar is more efficient when deployed on a large scale than is typical for domestic installations.

The DECC says that so far, around 250 MW of PV schemes have either been approved or are in the UK planning system awaiting approval.