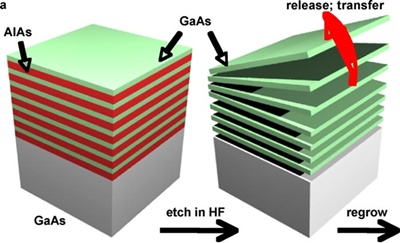 Concentrating photovoltaics (CPV) technology has received a further credibility boost, this time from the German engineering giant Siemens, which has bought a 16% stake in the North Carolina company Semprius. Further terms of the deal are yet to be disclosed.

Durham-based Semprius, originally called pSi-tech and a spin-out from the University of Illinois nanoelectronics and biophotonics research group headed by John Rogers, has developed advanced processes for producing a variety of semiconducting materials suitable for a wide range of applications, including GaAs-based infrared imagers.

In April 2007, Semprius raised $4.7 million in venture finance from a combination of Arch Venture Partners, InterSouth Partners and Illinois Ventures, before following that up with a $6.4 million Series B round (out of $8 million sought) in which the Central Intelligence Agency’s In-Q-Tel venture wing participated.

In recent years, the company had turned its attention first to multi-junction gallium arsenide cells capable of solar conversion efficiencies in the region of 40%, before going on to develop high-concentration modules using high-performance, low-cost optics to generate a concentration ratio of x1000.

The two companies already have a significant link, with Semprius’ CEO Joe Carr previously both president and CEO of the Siemens subsidiary Osram Opto Semiconductors. In a statement announcing the Siemens investment, Carr said that Siemens’ presence as a strategic investor would come at a crucial time, as Semprius looks to scale up its production capability. “Their far-reaching presence and strength in the renewable market offers us an immediate global footprint,” he added.

Joint developmens
Siemens and Semprius have actually been working together for at least the past 18 months, after signing a joint development contract in January 2010 to work on demonstration CPV systems. According to the two companies, Semprius’ first full test installation has been operating in Arizona since August 2010, with more installations scheduled to follow before the end of 2011.

Siemens’ Martin Schulz – VP of photovoltaics within the company’s renewable energy division – said that the Semprius investment would give it access to a “trailblazing” technology for clean power generation.

Although concentrating PV is generally only regarded as suitable for the “sun-belt” regions of very high direct solar irradiation, in recent months the approach has gained significant credibility. France-based Soitec has signed agreements to deploy 300 MW of peak generating power over the next few years near San Diego (about half of which is contingent on a loan guarantee from the Department of Energy), while the giant Munich Re insurance company is guaranteeing CPV systems developed by US firm SolFocus.

Although the market for CPV systems remains only a tiny fraction of the wider PV sector right now, analysts have predicted a 1 GW annual market to emerge by 2015, while Siemens says that it expects CPV to become a 6 GW market by the end of the decade.