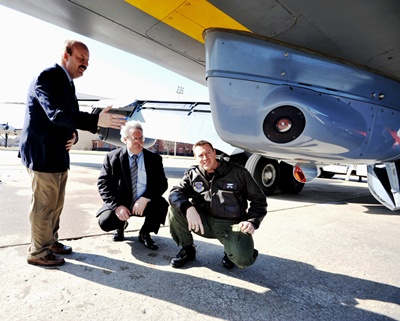 Northrop Grumman and Selex Galileo are set to expand their production of laser-based infrared countermeasure systems used to protect aircraft, after signing a memorandum of understanding to target the international marketplace.

The two defense firms have a long-standing relationship in directional infrared countermeasures (DIRCMs), having delivered 750 such systems – mostly to the US and UK– over the past two decades.

The new focus on markets beyond those countries and close allies will be based on an open framework permitting the integration of the various electro-optic subsystems that make up a full DIRCM system – including optical sensors, trackers and laser components.

On a simplistic level, the systems work by aiming an infrared laser – operating in the mid-infrared with key wavelengths in the 2-5 µm band – at an incoming missile that has been detected by an on-board sensor. The laser distracts a missile from its heat-seeking path, ideally making it veer off course.

Elbit gets $15M Italian Air Force order
Finmeccanica subsidiary Selex and Northrop signed the deal at the Paris Air Show, with Selex’s Alastair Morrison, senior VP of radar and advanced targeting at the company, saying: “This is a very significant milestone both in the Northrop Grumman – Selex Galileo relationship and in our approach to the export DIRCM market.”

Northrop’s Jeff Palombo, VP and general manager of the firm’s land and self-protection systems division, added: “We have been hugely successful protecting aircraft, and this [MoU] will further strengthen our collaboration and allow us to focus on our international customers as we launch a fully exportable DIRCM system.”

Over the next three years, Italy’s C130J and C27J transport planes and AW101 AgustaWestland helicopters will be fitted with Elbit’s ELT/572 DIRCM systems, which are based on its “MUSIC” countermeasures platform and were developed in collaboration with Elettronica. The MUSIC platform isn't only used militarily - Israel's national airline El-Al has also deployed the technology.

The Elbit systems are relatively novel, in that they use a fiber laser source. Future DIRCM systems in development at the moment may use quantum cascade lasers (QCLs) instead, although according to a current solicitation on IRCM technology available via the US Navy’s small business innovation research (SBIR) initiative, it is additional power that is now seen as a crucial requirement.

The Navy wants to develop a fiber coupler system capable of receiving multiple semiconductor laser sources operating in the mid-infrared. According to the solicitation, next generation IRCM systems must have the capacity to offer greater output power and wavelength range through a fiber than is presently available, in order to counter advancing threat technologies.

Current mid-IR sources are limited in the power and bandwidth they can deliver, and the Navy wants to see development of an ultra-broadband coupler operating across all IRCM bands (2-5 µm) in a single fiber. The device is expected to combine optical powers of up to 100 W, with insertion losses at less than 5 percent (-0.2dB).