IHS iSuppli reports that plunging prices of crystalline solar modules could reverse an anticipated fall in PV installations next year. 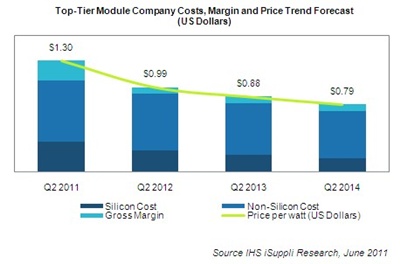 After a rapid recent decline in the cost of crystalline silicon photovoltaic modules, analysts at IHS iSuppli are now predicting that they will be selling for less than $1 per watt by the first quarter of 2012.

Henning Wicht and Mike Sheppard from the market research company say that the latest price declines came after the Intersolar Trade Fair in Munich two weeks ago – the world’s largest photovoltaics industry exhibition.

“Going into Intersolar, spot prices from the top Chinese brands, among the major players in the market, had been running at $1.49 per watt for mainstream c-Si modules,” they said. “By the time Intersolar wound up, prices had fallen to $1.30 per watt.”

For comparison, Bloomberg’s New Energy Finance division (BNEF) said last week that its latest survey of the industry showed an average c-Si module cost of $1.68 per watt, although it reported spot pricing as low as $1.49 per watt among some Chinese suppliers.

That price decline has been prompted by reductions in central government support via feed-in tariffs in the key market of Germany, and delays in the announcement of a new support mechanism in Italy, the world’s second-largest single market in 2010. That has led to a large inventory build-up so far this year, although a sharp increase in demand is predicted for the remainder of 2011.

With further tariff support reductions coming into force in early 2012, iSuppli has been among those predicting a PV market decline next year. But now it is forecasting such a sharp reduction in the price of c-Si modules that any such dip may be averted.

“What this means for the market could be momentous and far-reaching,” said Sheppard. “This trend and milestone is significant in that it opens the door for certain installations to potentially drop to $2 per watt, in what one hopes would be an important driver for stimulating demand.”

“Not only could such a development ward off a dip predicted in solar installations for 2012, it also signals that deep-pocketed and lower-cost structured companies will be getting aggressive about pressuring competition out of the market during the next year,” the analyst added.

Like BNEF, the IHS iSuppli team says that the plummeting cost of cells and wafers had driven the latest module price decline, quoting $2.30 as a typical wafer cost – comparing well with BNEF’s recent finding of $2.39, and representing a drop from $3.50 as recently as March.

But although raw material costs are expected to edge down further, module suppliers will still face a firm squeeze on their gross margins. Currently, those margins are running at 10-12%, but the intense competition now anticipated will see that slashed to between just 5% and 9%, according to IHS iSuppli.

One of the far-reaching implications for the industry is whether the domination of the vertically integrated business model among crystalline silicon solar companies will continue. “Can a vertical operation invest in wafers, cells and modules on the one hand, finance downstream projects on the other, and also continue to run world-class operations at each level?” asks the IHS team.

The answer to that question remains to be seen, but Sheppard and Wicht believe that it will be much more difficult for many of those operations to maintain a competitive advantage, and they predict an industry shake-out to result, saying. “Though many vertical operations will continue to thrive, the space will likely find increased competition from another breed of player – the so-called specialists that will be able to aggressively invest in just one area, and more important, hold their own against their vertically integrated rivals.”