Coherent is to launch a high-power fiber laser later this year, chasing a booming market led by IPG Photonics. 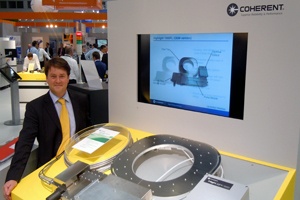 Ahead of its planned 2011 launch, Coherent is using this year’s LASER World of Photonics expo to demonstrate its first 1 kW fiber laser – with a 2 kW version scheduled for next year, writes Matthew Peach.

Branded the Highlight 1000 FL, Coherent’s fiber laser is modular in design and will not be supplied in a fixed enclosure so that it can be integrated – OEM style – into customers’ bespoke cutting or welding systems.

Frank Gaebler, the company’s director of marketing, materials processing, told optics.org that he anticipates fiber lasers will soon account for “at least 50%” of the entire cutting and welding sector and that Coherent “wants to be at the heart of the market”.

Acknowledging the substantial head-start achieved by the market leader IPG Photonics and other laser companies, Gaebler commented, “Although it is said that this type of laser lasts forever, at Coherent we know that is not 100% correct."

“It’s not so much that we want to chase after these companies as to achieve a good share in this growing marketplace,” he added. “Saying that, I respect what they have achieved with this technology and I know the competition will be tough.”

Coherent has over the past two years developed its fiber laser with a proprietary design and the company’s own formula of doped fiber – “probably not radically different from typical fiber laser architectures,” Gaebler admits. What is different is an integrated shutter system, which Gaebler believes potential competitors do not yet offer, and enhanced serviceability.

“The key messages that we will be sending to the market around the launch later in 2011 will be that the Highlight 1000FL will be modular, OEM design-friendly and offer easy access to components. Among other things, this will mean that repairs and modifications will be easier without the whole unit needing to be transported.”


Besides the prototype fiber laser development, Coherent launched a raft of other lasers at the Munich fair:

• It has expanded its Genesis family of multi-watt visible lasers for life sciences with two new models offering 2W and 4W of output power at 514 nm. Based on Coherent’s optically pumped semiconductor laser technology, the Genesis CX 514 is said to be the first solid-state laser to provide multiple watts of CW output at this legacy wavelength.

• The HighLight D-Series is a new range of diode laser systems, which deliver both high power and an increased range of “smart” output beam shapes. For example, the HighLight 8000D, with output power of 8 kW, is said to be the most powerful, industrial, direct diode laser system currently available with free-space beam delivery.

• Finally, the Vyper is a novel excimer laser annealing system that enables volume production of low temperature poly-silicon for “next generation” flat-panel displays.

This article has been been updated since initial publication.