The German laser systems company has sold 50 high-power disk systems to car maker Volkswagen, for delivery over the next two years. 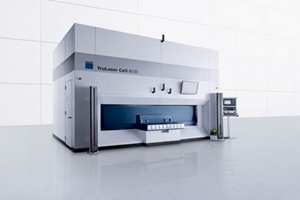 Trumpf is set to post a 70% increase in laser sales for its current financial year, which ends next month, while car manufacturer Volkswagen (VW) has just placed an order worth €37.5 million for fiber-guided disk lasers to be delivered over the next two years.

Peter Leibinger, the vice chairman of Trumpf and president of the laser technology division at the privately-owned firm, revealed the VW deal and the likely sales figure at the biennial LASER World of Photonics show in Munich, highlighting a huge contrast with the recession-hit 2009 event.

The recovery that began after that show has now turned into a full-fledged boom that a triumphant Leibinger says shows no sign of flagging. “We did a few things right,” he said, referring to actions such as investing in laser development at the height of the economic crisis.

“We believed in ourselves and now we are harvesting the fruit,” added Leibinger. “Orders are growing in all three key geographies and we are growing more rapidly than the [wider] market.”

The bulk VW order is for 50 of Trumpf’s TruLaser Cell 8030 series of laser cutting machines, which are based around a high-power, thin-disk laser source. They will be used in volume production of hot-formed parts for car bodies, one of many growth applications for laser technology in automobile production.

Leibinger said that the systems typically sell for €0.75 million each, making the two-year order potentially worth €37.5 million. The first batch of systems will be installed across three production facilities – at VW’s headquarters in Wolfsburg, and at its sites in Kassel and Spain.

“Two-in-one” cutting and welding
Trumpf paraded a wealth of new developments at the Munich event, including a new “two in one” approach for its TruDisk lasers that allows users to switch rapidly between cutting and welding applications with the same system. That is done by switching the beam between the core and outer ring of the fiber for delivery to the workpiece. The fiber’s 100 µm diameter inner core is used to deliver a beam for cutting, and the 400 µm outer core for welding applications. The approach now appears as standard on Trumpf’s five-axis TruLaser Cell 3010 series.

Also on view in Munich was the company’s new series 3003 fiber laser workstation incorporating a TruFiber 400 single-mode fiber laser. The 200 W tool is said to provide high-speed welding at up to 24 meters per minute, and can also be used to cut metal pieces up to 1.5 mm thick.

Meanwhile Trumpf’s TruDiode 3006 system, a direct diode tool operating at 959 nm and delivering a 2.75 kW output on the show floor, is expected to find applications in copper welding, for example in the production of the advanced battery designs that are set to be used in electric vehicles.

But despite the innovations in fiber, direct diode and disk lasers, Leibinger insists that there is still plenty of life left in the company’s workhorse CO2 lasers in materials processing applications. He says that in the current boom, unit sales of CO2 lasers have grown more than any other laser type.