With double-digit growth this year, the global market for laser materials processing systems is set to reach a new high. 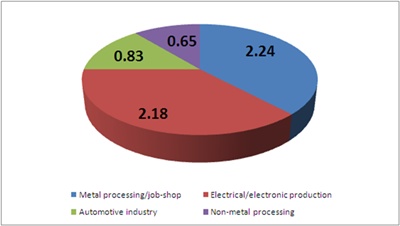 Sales of laser systems for materials processing applications will grow by at least 10% in 2011, with the market set to reach record levels in terms of both unit volumes and value.

Arnold Mayer from Optech Consulting, speaking at the 10th International Laser Marketplace, hosted at the LASER World of Photonics event, made the prediction, highlighting the impact of high-growth segments such as solar cell and flat-panel display production in Asia.

Growth of 10% this year would mirror the average annual rate of expansion of the market measured by Mayer over the past 25 years, and equate to a total market worth around €6.5 billion. – slightly higher than the peak witnessed in 2008. The analyst, whose market sizing is widely cited by the Photonics21 group and the European Commission, is highly confident that the 2011 target will be achieved.

In the wake of the sudden 2009 downturn, which initially showed the same rate of economic decline as the 1930s depression, annual sales of laser systems fell by nearly half. After a strong recovery in the second half of last year, Mayer now estimates the 2010 level at 16% below that 2008 peak level.

Mayer’s analysis also suggests that the rapid growth seen in China and the historic strength of the Japanese market for laser tools (largely for use in semiconductor manufacturing), means that the market for laser systems is now divided equally between Asian and non-Asian locations. Korea is now established as the third-largest Asian market.

Gas lasers still half of source market
The market for the laser sources used inside the systems is also now divided equally between gas (including the excimer lasers used in deep-UV lithography steppers and scanner tools) and non-gas sources, with non-gas sources set to take the lead in 2011 thanks to the faster growth of solid-state, direct diode and fiber lasers in material processing applications.

Metal processing and electronic production were the two largest application areas in 2010, with each accounting for just over one-third of the total systems market. Automotive production is the third-largest sector, accounting for 14%, with processing of non-metals worth 11%.

Looking forward, Mayer expects the long-term growth of laser material processing systems to remain at around 10%, with an expectation of significant investment in manufacturing capacity, particularly in Germany.

That sentiment is shared by market analysts at Deutsche Bank Research. Looking at the bigger picture in manufacturing, Philipp Ehmer from the company said that, after a V-shaped recovery, capacity utilization in Germany for all manufacturing applications now stands only slightly below the peak seen in 2008.

“An investment drive for both replacement and new machinery is on the cards,” Ehmer said, adding: “Manufacturers of laser machines will benefit.” And, even though the pace of the upturn in Germany has showed signs of slowing recently, the export-dominated German economy will see those focused on emerging markets as the prime beneficiaries.

Ehmer also expects the Japanese market for production equipment to remain robust this year, despite the impact of the earthquake and tsunami, and ongoing shortages of electrical power. However, the economist also sees risks in the US market brought about by low consumer confidence, increasing public debt and political conflict on the appropriate course to be taken in tackling that debt.