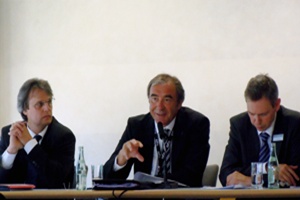 Considering the country’s welcome but surprise return to form since the global financial crisis erupted in late 2008 Gerhard Hein, the VDMA’s managing director, said the upturn came “in the near complete absence of the otherwise standard time lag between the resumption of production by the customer and the initiation of investment activities.”

A key factor for the recent resurgence in demand has been the rapid recovery of the Asian markets, the VDMA noted, especially that of China. This is where heavily-funded stabilisation packages had an almost immediate effect and where plant investments achieved the country’s pre-crisis growth rate by 2010.

The VDMA cited other growth drivers, notably the energy sector – an area which it said will continue to play a key role for the laser industry. Typical applications here involve lasers in the production of solar panels and high performance batteries for electric vehicles or fuel cells. Furthermore, developments in laser sources themselves are creating new applications, notably in fiber and short-pulse technologies.

However, on the downside, Germany is heading towards a serious labor shortage, which the VDMA believes could mean three million unfilled positions by 2015. “Photonics is considered to be the field of the future for the 21st century,” Hein added. “Already in 2011 more than 120,000 people are working in this sector and the need for well-qualified young professionals is on the increase.”

90% annual growth in 2010
To reach its positive conclusions about the sudden reversal of fortunes, the Working Committee had reviewed national sales and production figures for CO2 and solid state lasers over 2005 to 2010. Ahead of the crash, peak production (worth EUR 806 million) in 2008 followed 2007’s peak orders (worth EUR 957m) but after dramatic dips in production and orders in 2009 (EUR 362m and EUR 385m, respectively) these indicators had bounced back to EUR 569m and 733m by 2010, the latter surge representing annual growth of more than 90%.

To ensure that the photonics industries in Germany keep their leading position, experts from across Germany have developed R&D guidelines for the technology sector, which are detailed in a newly published document Agenda Photonics 2020. Besides identifying the perceived major challenges, this calls for German industry to invest 10% of turnover directly into R&D, potentially EUR 30 billion by 2020.

Photonics companies want to create 20,000 new jobs by 2015. The courses of action recommended by the agenda have been taken up by the brand-new support program presented here in Munich on the opening day of LASER 2011 by the Federal Ministry of Education and Research (BMBF).


Working Committee chairman Günther Braun, who is also CEO and president of Rofin-Sinar Group, gave optics.org his thoughts on the need for and benefits of state funding for developing Germany’s laser industry:

“Over the past two decades, we have seen the benefits of state funding when placed in the right areas,” he said. “This investment is not only needed for R&D but to help turn basic technologies into products that the market wants. Even at Rofin, where we spent USD 40 million on research and development in 2008, we still have USD 1.5 million per year in subsidies to support special developments.”

Considering the weak position of the euro against other major world currencies, Braun said that Germany had experienced this problem on and off since 2008. “We are used to these fluctuations and generally experience this problem in our margins; it has not really hurt our business because we have learnt how to react. Also, as the Chinese Renminbi is pegged to the dollar that is good for Germany’s exports to China.”

Turning to ultrashort pulsed laser technology, which has already become a hot topic at LASER 2011, Braun believes that it will still be some years before this technology matures into a substantial market.

“At the moment it is too early to say. Such lasers are still very expensive and they would need a growing market. It will not be a multi-million dollar market this year: picosecond and femtosecond lasers still need to be properly qualified before there will be substantial growth,” he concluded.