Amid short-term headaches associated with US government budgets, the imaging company senses major commercial opportunities in the long run. 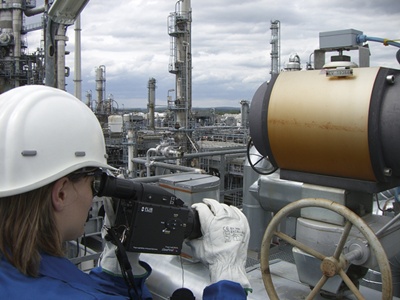 Infrared imaging specialist FLIR Systems is paying out a shareholder dividend of $9.6 million, as “continued headwinds” in US government procurement are largely offset by solid growth in other markets throughout the world.

The company has just posted revenue of $373.5 million for the opening quarter of 2011, up 30% on the same period of 2010 – although much of that increase was due to the recent acquisitions of ICx Technologies and Raymarine. On a like-for-like basis, revenues were up only 1.6%, said FLIR’s CFO Anthony Trunzo.

Despite the impact of those budgetary headwinds, the company’s expectations for the rest of the year have improved somewhat, with FLIR slightly increasing its full-year revenue guidance to between $1.7 billion and $1.75 billion.

In addition to that, with more than $250 million in cash on its balance sheet and no debt, FLIR is well set to fund any acquisitions – with CEO Earl Lewis saying that the company sees some opportunities for expansion. In fact, Lewis even sees the pressure on government budgets as an opportunity:

“This near-term friction around government spending is really a long-term opportunity, given [that] FLIR's products are generally more cost-effective than our competitors’,” said the CEO, adding that FLIR was in the middle of formulating a new five-year plan. The long-term trends are likely to see FLIR’s sales rely less on government and military spending, and more on commercial deployments of its infrared imagers, Lewis continued.

Among the factors driving growth at the moment are four new product lines in the company’s thermography division, and an iPhone app that has had 5000 downloads. Also new is “Quark”, the company’s latest compact imaging core aimed at OEM customers – launched at the SPIE Defense, Security and Sensing (DSS) trade show last week. The ultra-small imager offers 640x480 image resolution in a package no larger than a sugar cube. 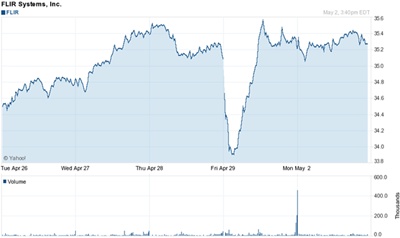 FLIR has also increased production of its “GasFindIR” product, designed for stand-off location of gas emissions in industrial settings that are difficult to access and sample by conventional means, with uptake driven by a recent ruling from the US Environmental Protection Agency (EPA). FLIR has ramped a second product line at its facility in Santa Barbara to support the growing demand.

During the latest quarter, the company also won a court ruling to dismiss an appeal by rival Raytheon in a long-running court battle. The patent infringement wrangle had seen Raytheon appeal a ruling for FLIR to pay only $3 million to settle a case initially brought in early 2007.

FLIR’s stock price dipped slightly after the company’s latest financial release, but soon recovered that lost ground. At close to $35 shortly after the market opened on May 3, FLIR was trading at a two-year high.