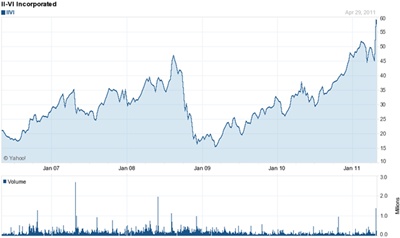 Infrared optics and materials supplier II-VI has doubled its earnings year-on-year, after both sales and bookings jumped by more than 30% in the third quarter of its fiscal year.

For the three months ended March 31, revenues totalled $130 million, up from $97.5 million a year ago, with its infrared and near-infrared optical components business units representing a combined $90.8 million. But with bookings even higher, at $142.9 million, the company is set for further rapid growth.

“Robust market momentum, strong operating performance and a record order backlog are causing us to increase our guidance for the fourth quarter and fiscal year,” said CEO Francis Kramer, in comments that sent the company’s share price soaring to a record high of close to $60. Kramer forecast fiscal Q4 sales of between $129 million and $134 million, meaning that full-year sales should just about tip over half a billion dollars.

“We see continuing strength in industrial markets as global economies rebound,” added the CEO. “Near-infrared market growth appears positive overall, with ongoing strength in China. We are monitoring US military spending to assess the effects any changes may have on our military businesses.”

But it was on the bottom line, with earnings of $25.7 million, where II-VI really surprised the market – its earnings-per-share figure of $0.72 smashing Wall Street’s $0.53 consensus and well ahead of the $0.59 expectations of analyst Longbow Research, thanks largely to unexpected tax benefits and currency effects resulting from a higher mix of sales from outside the US.

Defense squeeze
Mark Douglass at Longbow is expecting further growth, suggesting that II-VI will benefit from increased industrial laser deployments, as well as growing sales into military applications through its “Exotic Electro-Optics” subsidiary, which sells high-performance components for defense and aerospace applications. With its cash balance of $128.5 million growing fast, II-VI is also in a strong position to make acquisitions to fuel further growth, should it wish to do so.

And although a squeeze on defense spending in the US is widely expected post-2011, II-VI is well positioned to ride out any decline on that front through both its market and geographical diversification. International sales represented more than 60% of the company’s revenues in the latest quarter, while Douglass says: “We believe the company should also benefit from its increased focus on winning military projects, which have the potential to add several points to top-line growth over the next few years, even though defense budgets may tighten.”

II-VI’s defense activity includes products such as sapphire windows for the Joint Strike Fighter warplame, and the company is reportedly confident about future cuts to spending because it is primarily exposed to intelligence, surveillance and reconnaissance (ISR) programs, the defense buzzword du jour and a segment that it still expects to grow.

After announcing the latest results, II-VI's stock jumped by more than 20% to approximately $59. Longbow Research has increased its 12-month price target for the stock from $54 to $68.