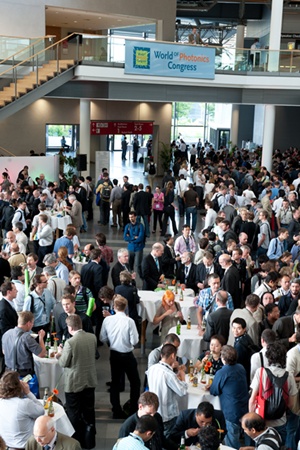 by Matthew Peach in Munich
Ultrafast (femtosecond) lasers have moved well beyond the lab and are taking up residence in factories - a keynote conference heard today at Laser World of Photonics in Munich.

In a presentation entitled Femtosecond Technology: Coming of Age, Barry Schuler, chairman and cofounder of Raydiance, Petaluma, Ca, US, compared the position of the femtosecond laser just a few years ago with how “conventional wisdom” perceived the Internet back in the early 1990s: “hardly anybody anticipated that so many people the world over would depend on the web for shopping and entertainment, communications and work.”

Earlier still it was the PC that was underestimated: Ken Olsen, one time CEO at Digital Equipment Corporation, famously commented: “there would be no reason for any individual to have a computer in their home.”

Schuler today argued that, in a repeat of history, the femtosecond laser has until recently been perceived “as an R&D toy for Geeks… not powerful enough for serious applications… only suitable for a small research niche… and not for the commercial market.”

But an Internet or PC-style turnaround is already happening to the ultrafast laser. Schuler described how the past 30 years of femtosecond R&D has seen this erstwhile favourite of costly, university-only photonics research projects, now finding specialised applications in athermal ablation, notably the drilling and cutting high precision holes such as in the production of medical stents free from thermal damage caused by slower nanosecond pulsed lasers.

He envisages a great deal more than the ultrafast laser’s interesting material effects in sub-ablative regimes. He told the Laser 2011 conference: “There is rich potential across many applications.“

Realising this potential, Schuler’s company Raydiance has designed a femtosecond laser system that is now manufactured ruggedized enough to cope with factory conditions. These lasers are based on three key principles to ensure reliable performance under the noisy, dusty, variable temperature conditions of manufacturing.

These are: a fiber-based photonics architecture; an onboard computer controlled operating system and an application layer. “Software is the key,” Schuler told the conference. “You can not have a reliable robust femtosecond laser that isn’t being controlled by a software loop.”

Other advanced materials market areas that are immediately interesting for Raydiance include: glass subsurface ablation, the production of polymer medical stents (metal replacements); working on quartz microfluidics, and with other composite materials. And beyond materials Schuler is also looking at medical therapies, life sciences, energy and security areas.


The second keynote focused on the exciting potential of ultrafast lasers – more technical in tone than Schuler’s swashbuckling style – but no less important for its message and implications. Femtosecond Laser Technology: Enabler of a new dimension of Materials Processing? was presented Prof. Reinhart Poprawe, Chair of Laser Technology at Aachen University and the Fraunhofer Institute for Lasertechnology.

He told the conference: “The motivation to use femtosecond pulses is the combination of precision and power. These ultrafast sources enable high precision and high throughput manufacturing of various materials and products.” For Poprawe, the key areas where ultrafast lasers are making a difference are: friction reduction and functionalized surfaces; life science and medicine technology; multi-component materials and multi-layered systems; and integrated optics and semiconductor technologies.

A key issue that makes femtosecond pulses necessary for certain high-precision material treatments is the need to hit the sweet spot of optimal penetration depth combined with minimal or no sub-surface damage. Considering materials such as epoxy, steel and aluminium, Poprawe showed how the critical pulse length ranged between 10 to 10-15 seconds.

Poprawe cited one example of how femtosecond laser treatment of turbine blades enabled the ideal design of funnel shaped cooling vents in turbine blades that would have not been possible with treatment by longer laser pulses. So-called “effusion cooling” is achieved by rows of laser-drilled holes. Instead of a few large holes that could mechanically compromise stressed structures, hundreds of thousands of small and – crucially – contoured holes are drilled by a femtosecond laser.

Other examples of suitable materials for femtosecond treatment, which Poprawe has observed, include metal injection moulds for polymer component production, carbon fiber reinforced polymers and glass-fiber, and even human dentine in novel dentistry procedures.

Concurring with Schuler that the ultrafast laser has a bright and expanding future, Poprawe concluded, “Already, over 1kW average power femtosecond lasers have been widely demonstrated. There are promising applications appearing in the materials treatment-domain notably with metals, glass, ceramics, and complex compounds.

”For most applications pulse lengths in the range of 500fs to 10ps already seem feasible and there are undoubtedly future R&D projects looking at novel ablation processes, new sources and in scanning for medical, security and yet to be determined applications.