Concentrating PV division agrees another 125MW of deployments in the San Diego area, as the DOE puts other solar applications on hold. 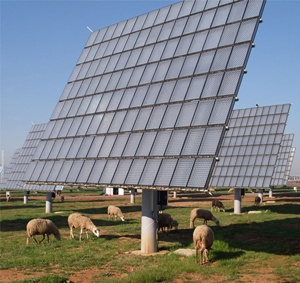 The concentrating photovoltaics (CPV) systems division of the French materials company Soitec has agreed a further 125 MW of deployments for the technology in southern California, in the form of two new contracts with the utility company San Diego Gas & Electric (SDG&E).

Following three smaller deals valued at up to 30 MW announced last month, that brings the total agreed directly with SDG&E to 155 MW, although these contracts still require approval from the California Public Utilities Commission.

As a result, San Diego looks increasingly like becoming the center of the universe for commercial, utility-scale CPV systems deployment, with Soitec also planning to build a new manufacturing facility in the area.

However, there is some doubt now surrounding a 150 MW facility for the area, also featuring systems provided by the Soitec CPV division. That deployment was the first to be announced for the San Diego area, in March this year, and Soitec stresses that this agreement is based on a contract between it and Tenaska Solar Ventures, rather than directly with SDG&E – even though SDG&E will be the eventual energy provider in all cases.

To support the 150 MW development, Tenaska had applied for a loan guarantee from the US Department of Energy (DOE). However, following political pressure on federal spending in the US, the DOE appears to be scaling back its loan guarantee commitments. Within the last couple of weeks, Jonathan Silver, the executive director at the DOE’s loan programs office, has written to all of the companies working on projects that have applied for a loan guarantee. Most were told that their projects had been put on hold.

Alternative funding?
According to a report from Reuters quoting Tenaska’s VP of development Bart Ford, its 150 MW project featuring Soitec’s CPV systems was one of those projects. Ford told Reuters that Tenaska might still be able to finance the project through a different federal loan guarantee program, or else through a commercial lender.

Even though the Tenaska project is ultimately for SDG&E’s benefit, Soitec says that it doesn’t mix up the contracts agreed directly with SDG&E with those agreed through the third party, which is why it is now stating that it has a total of 155 MW with SDG&E – enough to power 60,000 homes at peak output. Regarding the Tenaska setback, Soitec told optics.org: “We are very confident and we believe that Tenaska is pursuing every option available to complete financing of the project.”

Despite the element of doubt that the loan guarantee issue will inevitably prompt, analysts at Greentech Media (GTM) now say that CPV installations will likely top 1 GW per year by 2015 – the year that the 150 MW Tenaska plant is scheduled to be completed.

Quoting from its new report on the subject, GTM says that 28 MW of CPV has been installed to date – less than 0.1% of total PV installed, which itself only provides about 0.25% of the global electricity supply.

The 1 GW forecast is however predicated on CPV companies being able to meet a target of reducing the installed cost of a CPV system by more than 30% by 2015. That will be achieved largely through improvements to multi-junction cell manufacturing, both in terms of reduced costs and higher average efficiencies. With a multitude of companies including photonics giant JDSU and a host of start-ups looking to challenge the current market leader Spectrolab, the increased competition should certainly help to drive down device costs.

Bankability
There is also healthy competition among the leading systems companies, with Soitec’s chief rival Amonix having just completed the ramp-up of its new manufacturing facility in Las Vegas, Nevada. According to GTM, those two companies and SolFocus together account for 96% of global CPV projects in operation today, having sealed their competitive advantage in part by attracting key financial partners such as the finance giant Munich Re.

This is seen as crucial for the credibility of CPV, since the technology has very little in the way of a track record in the ultra-conservative world of energy generation. The Canadian CPV module developer Morgan Solar is also tipped by GTM to announce a new $16.5 million venture investment shortly.

Officially, Soitec says that its CPV division’s total US solar projects amount to around 300 MW. “This should be delivered over three years starting at the end of calendar 2012,” it stated in its latest financial update, adding: “Revenues derived from the sale of CPV systems to these projects are expected to be [around] $2.50 per watt, with potential additional revenues from other services related to full turn-key solutions for solar farms.”

Soitec is investing in a 50 MW extension of its assembly line in Freiburg, where the company originated as Concentrix Solar, as well as the planned 200 MW San Diego facility, to meet the anticipated demand. The company is also looking to exploit its world-leading semiconductor materials expertise in both the solar and LED sectors, with plans to initiate a first pilot line at its Bernin wafer facility, in another move that should help to push down the cost of the solar cells used in CPV systems.