The inexorable rise of photovoltaic cell manufacturing provides applications for a huge range of laser technologies, hears the conference. 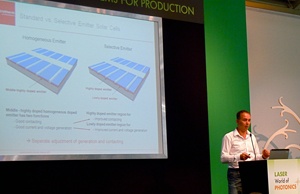 There's an app for that

by Matthew Peach in Munich
Lasers of almost all types are becoming crucial for both the improvement and volume production of solar cells, according to industrialists at LASER World of Photonics in Munich..

In a special session at the event chaired by Arnold Gillner, ablation and joining specialist at the Fraunhofer ILT Centre, Aachen, a set of five presentations underscored two key ideas: that PV’s growth rate is ranging from steady to exciting, and; however the technology evolves, lasers will be critical.

Gillner commented, “As PV wafer thicknesses go down while demands on process reliability go up, it is only laser processing that offers the means for fast and high-quality machining. Moreover, it is critical for new manufacturing such as selective doping and thin film ablation.

“Recent developments on ultra-short pulse lasers and temporally shaped laser beams are enabling novel production processes, which are increasing the performance of existing solar cell production lines. The combination of the latest lasers with high-speed scanning systems and process-adapted beam shaping is allowing machine suppliers to meet the demands of today’s PV producers.”

Roland Mayrhofer, from Rofin Baasel, explored the use of solid- state lasers in industrial solar cell manufacturing. “The laser is an essential part of thin film and crystalline solar cell production,” he said.

Correspondingly, the PV-related industries are increasingly seeing all kinds of solid-state laser concepts – whether side-pumped rod, end-pumped rod, disk, fiber, slab, diode or hybrid technologies – absorbed into solar cell development and production, almost as soon as they are ready for manufacturing.

Exploratory phase
Prof. Bert Stegemann, Professor for Photovoltaics at Berlin’s University of Applied Sciences, described how an efficient and reliable monolithic series connections of thin-film solar cells can be achieved by laser scribing via ablation.

“In the case of silicon thin-film solar cells, laser scribing is an established process, whereas complete laser ablation of CIGSe-based solar cells is still in the exploratory phase,” he commented. “So far, scribing parameters have mostly been found in an empirical way and fundamental studies are still in high demand by the PV industries."

Peter Fath, CTO at Centrotherm, which has established PV manufacturing plants worldwide, made a presentation entitled Selective Emitter Solar Cells Using Laser Processes on an Industrial Scale. “With the aim of increasing the efficiency of common screen-printed solar cells and reducing the total production cost per watt-peak, Centrotherm has introduced the selective emitter process into production,” he said.

This approach is based on laser diffusion: the phosphosilicate glass resulting from a POCl3-diffusion is locally heated by laser. This leads to a higher phosphorus surface concentration and improved contact passivation and lower contact resistance to the silver paste that is subsequently printed at these locations.

Fath added, “Not only the high quality phosphorus diffusion and a defined composition of the phosphosilicate glass layer are decisive for the economically viability of the process, but also the laser parameters.”

The significant laser parameters are a uniform energy transfer, low laser damage and high process speed. In order to fulfill these requirements, a unique fiber-guided multimode laser was developed in cooperation with Rofin. The fundamental characteristics of the process are a uniform flat-top profile with a 300x600 micron rectangular spot and a process time of less than 2 s per 6 inch solar cell. This has led to a significant increase of 0.3% in cell efficiency.

Sven Wanka, a senior project manager at cell maker Q-Cells, focused on what, in the end, is the key challenge for the solar industry: to reach “grid parity”.

“Along with just increasing capacities, further enhancements on production and cell efficiencies must be implemented to benefit from scaling effects,” he said. “Additional key requirements will be to impact lifetime quality positively, intensified process optimization and quality control."

Laser marking will provide a meaningful contribution to meet these requirements, he said. Applied to the raw wafer at the beginning of the manufacturing process, each solar cell will be traceable along the entire value chain and over its whole lifetime.