As new entrants line up to challenge IPG, Oclaro is aiming to become the primary merchant supplier of power diodes for fiber laser systems. 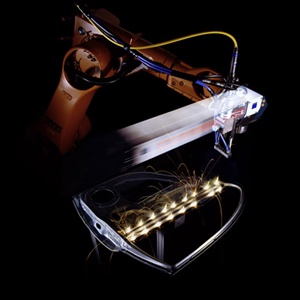 Oclaro is to push the cost and performance of high-power laser diodes to new levels in a bid to secure a position as the leading merchant supplier of pump devices for the fast-growing fiber laser sector.

The high-end active component maker is aiming to drive the merchant price of high-power single emitters to below $10 per watt, from the current level of between $12 and $15. According to Michael Atchley, senior manager for product marketing at the firm, that can be done largely through a combination of new chip designs for brighter and more efficient operation, and by reducing the size of emitter packages by 20%.

At the moment the fiber laser sector, estimated by Oclaro and others to be worth around $1.5 billion per year, remains dominated by IPG Photonics – particularly for high-power lasers in industrial materials processing applications like cutting and welding.

Although challengers are starting to emerge, IPG’s vertical integration - it produces high-power single emitters using a molecular beam epitaxy process at its laser fab in Oxford, Massachusetts – has been a key factor in maintaining that dominance, allowing the company more pricing flexibility and leaving little room for merchant suppliers needing a large market pull to manufacture the chips economically.

But as fiber lasers continue to gain traction, and the market for them grows at Oclaro’s estimate of 15-20% each year, there are some signs that the competition will also now grow. Traditional CO2 and solid-state laser companies Trumpf and Rofin-Sinar each has a subsidiary focused on the technology, while GSI’s JK Lasers has also entered the market and JDSU is working on a multi-kilowatt system with Amada.

Production challenges
Such is the complexity of high-end diode laser production that only a handful of companies are able to make devices that are suitable for the relentless environment of 24/7/365 manufacturing, as well as the kind of reliability normally associated with pump lasers used in optical communications.

Along with JDSU and IPG, Oclaro has a strong claim to be the leader in that technology, having initially developed products for communications. As with any high-end semiconductor application, volume demand is a key requirement for the component supplier, and only now does it appear to Oclaro that IPG’s competitors are ready to commit to the kinds of volume purchases that it needs. 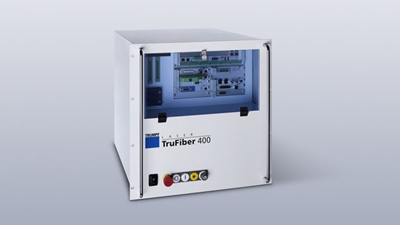 Through a combination of vertical integration, diode manufacturing expertise and market dominance, IPG has been able to hold a major price advantage over its rivals thus far. For that reason, Oclaro knows that it must drive down the basic cost of its diode emitters while simultaneously improving performance.

According to Atchley, the benchmark cost of $10 per watt is possible at the moment with lower-power emitters, but he estimates that $12-15 per watt is more typical when it comes to the diodes required for high-power systems.

To deliver that cost reduction, Oclaro is working on some key technological challenges, including fundamental aspects like the epitaxial structure of the laser chips, to improve emitter brightness and efficiency.

Refined semiconductor structures have shown promise in “hero” devices so far, delivering the 70% conversion efficiencies that are needed. Replicating that kind of performance in volume production and with a high-yielding process is a tough challenge, but Atchley believes that it will be achieved inside the next couple of years.

25W multi-emitters
As well as the high-performance single-emitters, Oclaro has been developing a range of multi-emitter packages to address the low- and mid-power range of the fiber laser market. The company told optics.org that there is already a strong demand for these 25 W products, which contain three individual emitters. “We are in volume production and ready for large orders,” said VP of strategy and corporate development Yves LeMaitre.

There is also a technology roadmap for the multi-emitters, with Oclaro aiming to develop a wider range of products with a much higher total output power, partly by improving the optical alignment of the individual devices in the package. 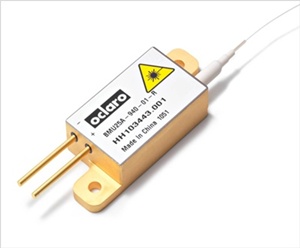 Targeting the fiber laser space is part of Oclaro’s wider diversification strategy, as the company aims to become less reliant on the cyclical market for components dictated by upgrades to optical communication networks.

In its latest fiscal quarter, Oclaro was hit by a slowdown in demand as telecommunications customers worked through a build-up of inventory, and posted a net loss of $9.4 million after a sequential decline in sales to $116.6 million. That slowdown is expected to continue for the next few months, and highlights the need for Oclaro to diversify and keep its key laser chip manufacturing facilities in the UK and Zurich as full as possible.

Oclaro will be showcasing the products and highlighting its diode development roadmap for fiber lasers with a presentation from Atchley at the LASER World of Photonics show in Munich next week. At the same event, it is expected that many of its target customers will be announcing new fiber lasers as they look to tap into the fast-growing market. One – the Trumpf subsidiary SPI Lasers – will be showing off four new fiber lasers, including a 1 kW OEM design.