Laser sales up as GSI settles case with SEC

Reorganized and once again listed on the Nasdaq exchange after emerging from bankruptcy, GSI Group plans to refinance its debt later this year. 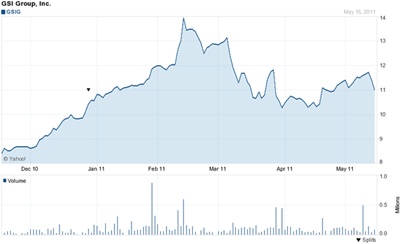 Sales of laser and precision motion products have grown steadily at GSI Group, as the company continues to reorganize itself following Chapter 11 bankruptcy proceedings last year.

Now headed up by CEO John Roush, formerly a senior executive for PerkinElmer’s optoelectronics division, GSI posted total revenues of $91.9 million for the first quarter of 2011.

Although that total is 20% lower than the figure that it registered for the opening three months of 2010, the comparison is not directly meaningful because GSI chose the earlier period to recognize a large amount of revenue from its semiconductor systems division relating to orders placed prior to 2009. A combination of problems within that division and a highly leveraged acquisition of Excel Technology in 2008 were the root cause of the company’s financial difficulties.

Laser growth
Now re-organized into distinct reporting segments, GSI’s laser and precision motion businesses both showed solid year-on-year growth in the opening quarter of the year. Laser products registered an 8% increase in sales to $30.7 million, while precision motion showed a 28% jump to $50.6 million – both benefiting from a strong recovery in the global manufacturing economy and the semiconductor market.

New CFO Robert Buckley – one of many new senior appointments at GSI recently – said that sales of fiber lasers and laser systems for scientific and industrial applications had been the primary drivers of the laser division's growth. The company sells fiber lasers through its JK Lasers subsidiary, and although the product line represents a relatively small part of GSI’s overall mix, Roush says that it is growing fast, and that the company was able to exploit some long-standing customer relationships to move the technology to market.

JK Lasers is just one of a large number of subsidiary photonics brands that exist under the GSI umbrella. Other include Synrad, Quantronix, Cambridge Technology and Continuum Electro-optics.

The strong top-line performance meant that the restructured company was able to post net income of $6.2 million for the opening quarter of 2011, with Roush feeling sufficiently confident to issue full-year financial guidance.

“Our first quarter results were strong and exceeded our expectations,” said the CEO. “All three of our businesses made positive contributions to our performance. The company continues to build momentum [and] this has given us increased confidence with respect to the full year outlook.” Roush is expecting to deliver higher revenues and profit in the second quarter, and has now predicted that GSI will generate around $380 million in the full year.

SEC settlement
There was more good news for the company after the US Securities & Exchange Commission (SEC) dropped an investigation into historical accounting practices within GSI’s semiconductor systems division.

“The company has agreed to settle with the SEC, without admitting or denying the findings of the SEC,” GSI announced. “The SEC did not charge GSI with fraud, nor did the SEC require GSI to pay a civil penalty or other money damages as part of the settlement. The settlement completely resolves the SEC investigation as it relates to the company.”

Commenting on that specific development, Roush said: "GSI fully cooperated with the SEC in its two-year investigation and has undertaken a number of corrective actions and internal control enhancements.”

With that distraction out of the way, Roush and his senior managers will also be looking to refinance the substantial debt that GSI still owes as a result of last year’s enforced reorganization. The company has a debt of $108.1 million listed on its balance sheet, relating to senior secured payment-in-kind (PIK) election notes, with interest accruing at 12.25%.

The interest rate on the existing debt has now been reduced by two percentage points – a reward for the company’s successful re-listing on the Nasdaq Global Select Market stock exchange in February – but with GSI now profitable and benefiting from strong market conditions Roush is keen to refinance on more favorable terms. That process should be completed in the third quarter of 2011, he said.